In the two weeks that have passed, one theme has become clear: feelings are in the air. However, this is a STEM camp, and definitely not a dating website. As a reminder, we laid out a few simple rules to help keep order among 232 hormonal teenagers. Always use common sense, but also remember the following three golden rules.

​1. No one-on-one interaction. Exclusivity between two individuals is the first step to the formation of a couple. Thus, unless you are supervised by an RA, do not engage in intimate conversation with another COSMOS disciple. Should you ever be approached by an aspiring significant other, always respectfully decline. A foolproof method is to extend your palm towards the perpetrator’s face to convey the meaning of a stop sign.

2. Avoid prolonged eye contact with each other. Eye contact is one of the easiest and most powerful ways to make a person feel recognized, understood and validated. Because of this, it is absolutely necessary that no connection like this is made. To avoid such situations, always remember the three second rule. Every three seconds of eye contact should be compensated with three seconds of looking away in order to maintain your pure COSMOS adventure.

3. Most importantly, remain an arm's length away. Physical contact is the bane of platonic cosmos-friendships. Holding hands, hugging, high-fiving, fist-bumps, handshakes—these are all representative of a romantic engagement. So the most simple and effective way to avoid the possibly romantic and vile effects of touching another COSMOS human is to stay an arm’s length away.

These three straightforward rules are pretty effective in preventing any unwanted relationships that would detract from the scholarly experience that COSMOS is trying to provide. If everyone follows these simple and clear instructions, the inevitable disarray that would arise from COSMOS coupling will be averted.
​
Remember, folks: learn, don’t yearn.

On COSMOS’s opening day, twenty two cluster 9 kids came together for their cluster orientation. Although the twenty two strangers would eventually become twenty two best friends, they first had to get to know each other.

As the awkward students huddled together, the ever-growing restless energy came to a climax. Fortunately, Monkey Martín gathered everyone together in a circle for an icebreaker. One by one, each person said a word that started with the first letter of their first name followed by their name. “Super Sudhir, Jonathan Jonathan, Edamame Elliott, Edamame Edmund, Eat Evan, Khan Academy Kevin, Rice Richard…” and finally, “...Monkey Martín”. Thus was born one of, or perhaps, the greatest RA to ever walk the inspiring grounds of UCSC COSMOS.

However, at the time, Monkey Martín’s greatness was not apparent because these poor kids were about to enter one of the worst and most painful rites of passage that would take place at COSMOS: “The ship is sinking”. After a grueling five minutes of chanting “How many? How many?”, the students were not very excited about their time at COSMOS. Little did they know that they would have to overcome this nuisance of an activity many more times in the near future.

“How many times can one pop cracklin’ ship sink??” exclaimed Edamame Edmund in exasperation.

Eventually Martín understood their pain, and he never forced the kids into such an agonizing game again. He racked his brains, and finally, with the help of two genius students, the game of Baljeet, Baljeet, Prajeet came to be Cluster 9’s favorite game. He and fellow Cluster 9 RA Lazy Liz bonded greatly with all the students of Cluster 9 through many rounds of intense gaming.
​
This was the establishment of the dynasty of Monkey Martín: the man, the myth, the legend. 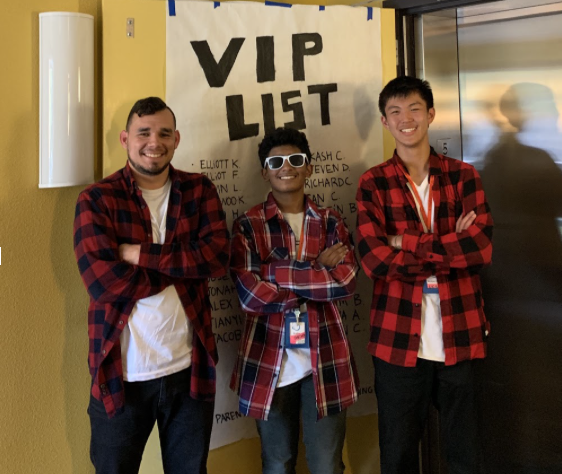 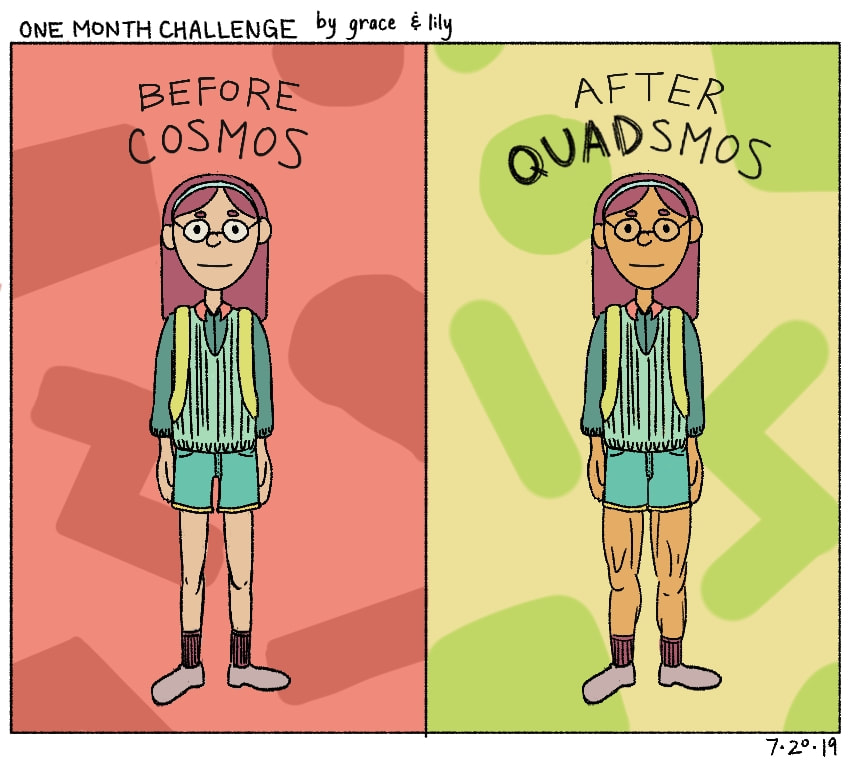 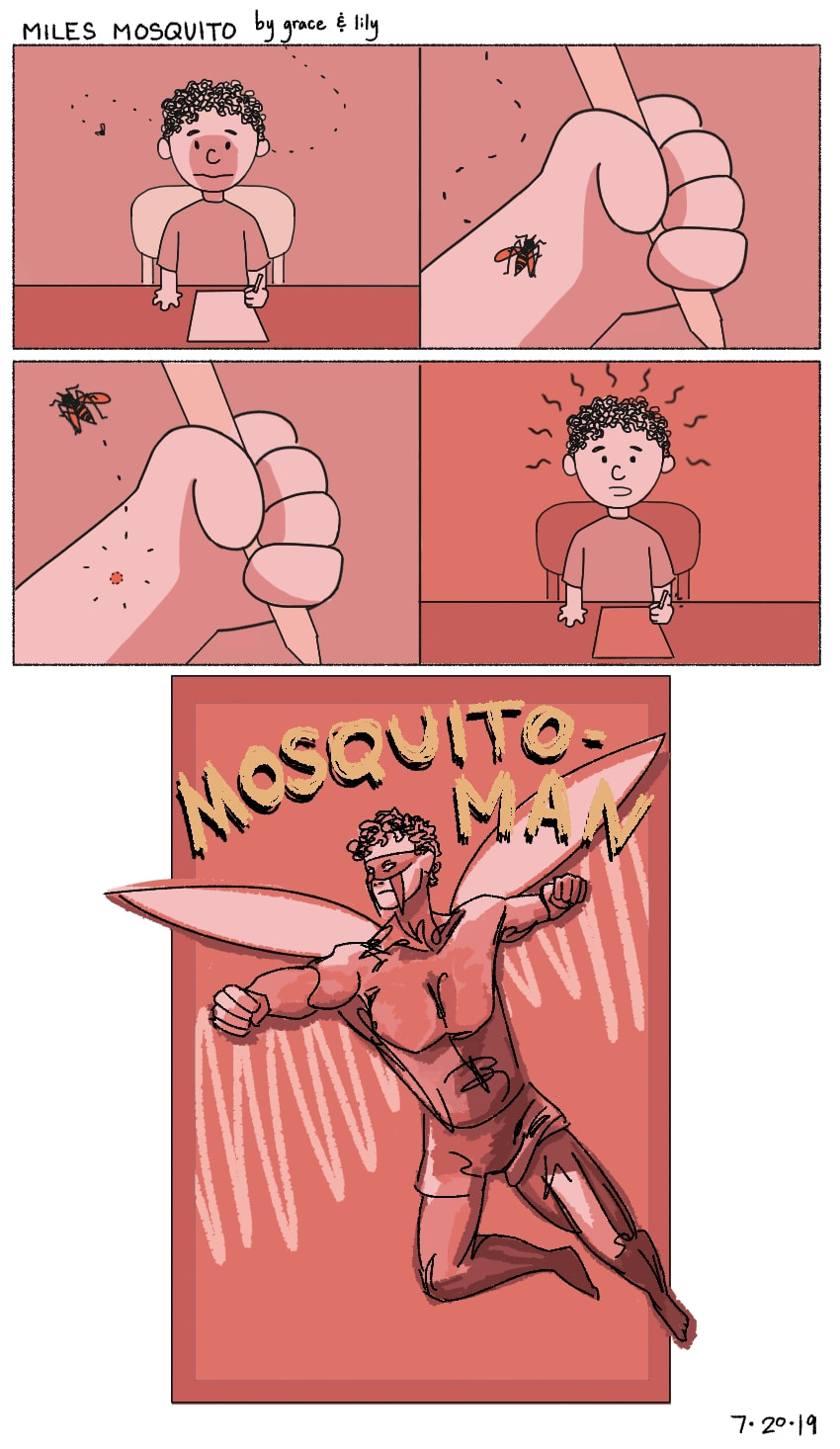 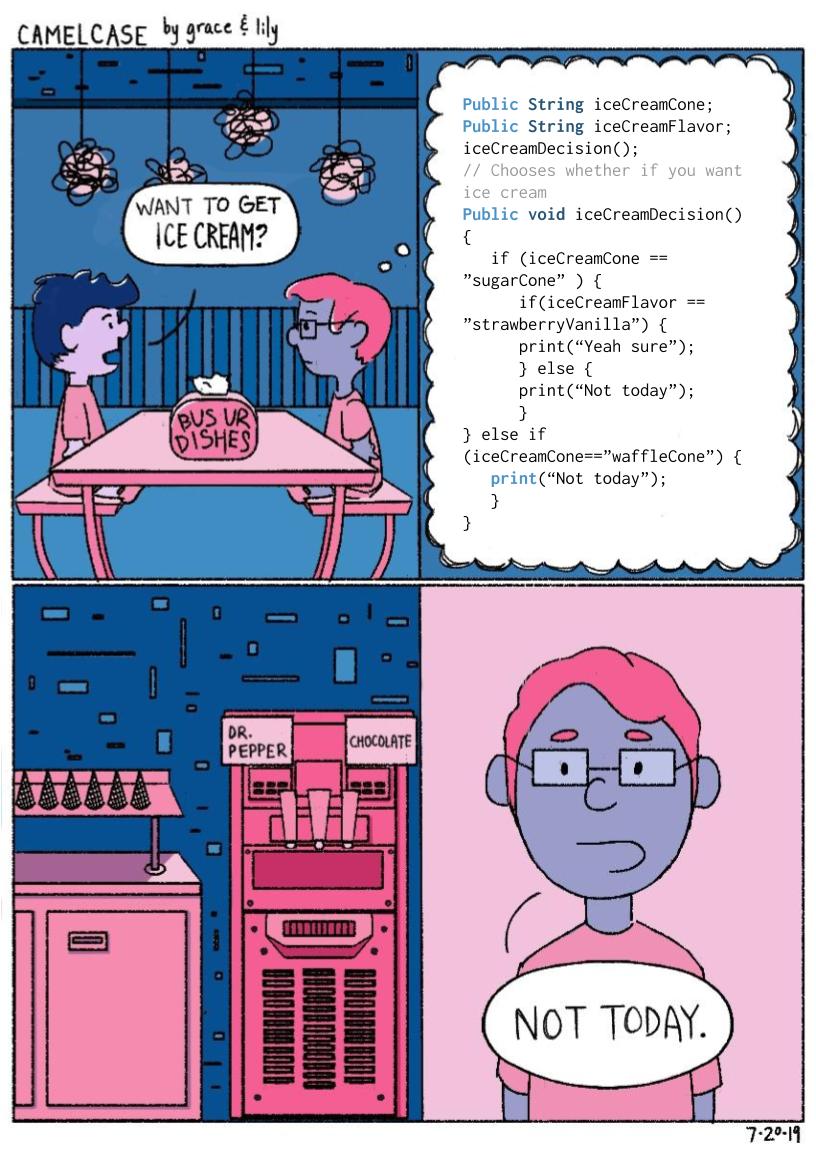 This week, clusters 2 and 10 had the exciting opportunity to visit the NASA Ames research center. After unloading the bus and going through security, we were led into a lecture room. While eating our lunches, we listened to a few lectures beginning with a brief introduction about the research lab, then a second lecture about exploring Mars via lava caves to search for life using rovers, which they tested at the caves at the Lava Beds National Monument in California. Our last lecture was about using nanopore sequencing to analyze genetic material. A nanopore is a small protein or silicon hole that you put your genetic material through. By applying a current through the nanopore solution, we can use the changes in voltage to determine the different nucleotides of the DNA.
We then visited a Mars rover test field which was littered with rocks and had a few hills in the distance. The expert there explained to us his new rover design, named “The Super Ball.” This rover has a sphere-like matrix of cables and joints that help it roll around the landscape instead of driving; such a sturdy design allows it to navigate extreme terrain.
Finally, we made it to the highlight of the field trip, the wind tunnel, where we were immediately awed by the sheer size of the structure- it contained a massive intake vent that is the “biggest window in the entire world,” according to the tour guide. The vent even had a layer of steel mesh to prevent birds from being sucked into the tunnel. When we got in the tunnel, everybody took out their phones and began taking pictures. Interestingly, whenever someone correctly answered one of the tour guide’s questions, he gave the student a NASA fidget spinner, effectively incentivizing everyone to pay attention. The tour guide explained that the tunnel was 80 feet tall and 120 feet wide, and that in order to bring aircraft into the wind tunnel, they needed to open the “world’s biggest doors” and have the “world’s biggest crane” carry it inside. Additionally, the walls have an 8 inch soundproofing layer which eliminated all echoes. We ended our field trip with some time to spend at the gift shop. Many students bought shirts and jackets, while others bought mugs and space monkeys. We returned to UCSC tired, and most of the students ended up falling asleep on the bus ride home. 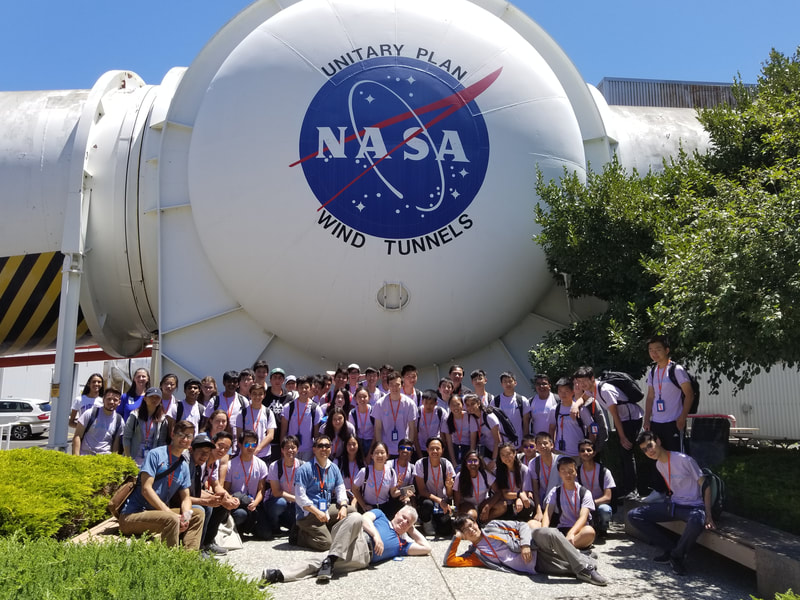 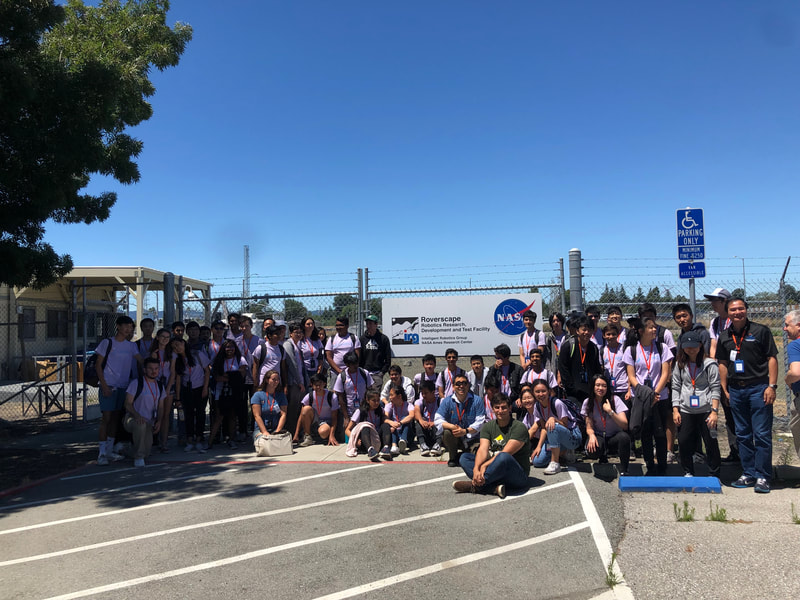 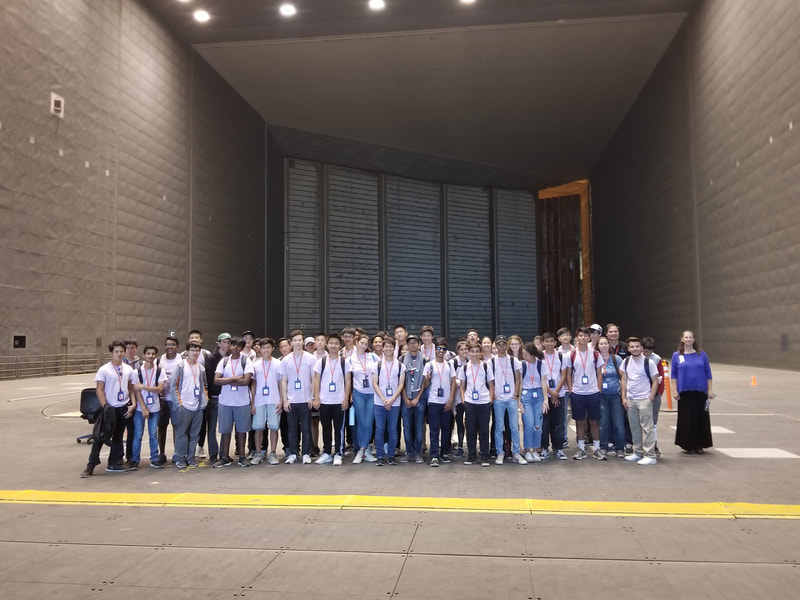 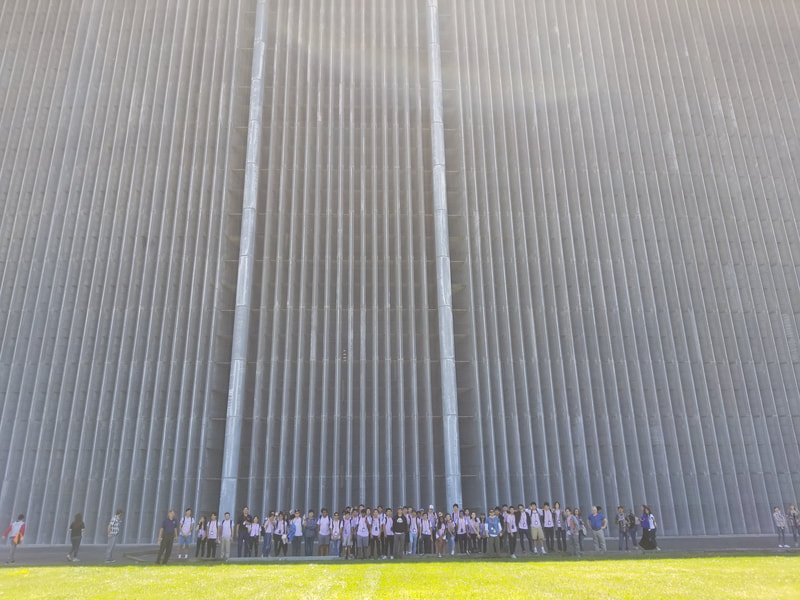