Along with their studies, COSMOS provides many fun activities for students to participate in.

The highly anticipated talent show was held on Friday in the college 9 and 10 multi-purpose room, where over fifty participants exhibited their unique talents. The whole room was dimmed where all the focus was on the stage. A drum set rested in the middle of the stage, while RAs held several posters with large text. One of them displayed the word “silence”, while others had the words “applause” and “laughter”. As the show started, the stage lit up with bright yellow, and all eyes were on the first student -- Lenard, who played on the drums. He was met with great applause. The next participants were Agustine and Carmen, who told jokes during technical difficulties to entertain the audience. Cluster 9’s very own Evan, Richard, and Kevin taught the crowd how to cook ramen in their skit. To pass time, Evan and Richard told jokes to Kevin while all three brought useful items like Evan’s lamp and Kevin’s blanket. Unfortunately, it took over four minutes for the water to boil, and enduring the painful humor all the while lead the crowd to question their sanity. Nevertheless, everyone enjoyed their legendary jokes, and a Cluster 9 poll showed that they had the best act in the minds of the people. Julia sang a slow Broadway song which prompted phone flashlight swaying in the audience. The next performance was by Jeffrey, who played Osu!standard on his gaming laptop. The sudden burst of the 69% volume music of the USSR national anthem on his laptop, along with the appearance of Raul’s face animated the crowd made him an instant fan favorite. Several members of Cluster 4 and Weilin then participated in a Brawl Stars solo showdown. Sean, not the RA, was ranked third in the entire U.S. for one character and his teammates challenged the crowd to play him while Weilin served as the commentator. Cluster 2 performed a synchronized dance in which Justin showed off his Fortnite dance while singing Despacito. Andrea played the viola and Conner and Terrie sang “Love is an open door” from the movie Frozen. In the end, Conner proposed to Terrie, but sadly he was rejected as there cannot be any COSMOS couples. Ben, who is in the top 5000 for playing Osu!mania, wowed the crowd by achieving a perfect streak of over 900 as well as a 96.9 accuracy. The last act of the day was by Cluster 4, who sang happy birthday to Carmen. All in all, the talent show provided students an opportunity to display their impressive skills and a fitting ending to the third week of COSMOS.

On Saturday, the COSMOS Olympics in its eighth consecutive year was held at the OPERS field. Instead of representing countries, students competed for their cluster in two separate divisions, Clusters 1-5 and Clusters 6-10. A point system was used to determine the victors. First place received five points, second place received four points, and so on. There were four relay events that were each coupled with a minigame. The events required a team of four people to accomplish a specific task. The first event involved finding a piece of gum within whipped cream and then chewing it in order to blow a bubble. There was crab walking, a math competition involving doing the multiplication table, and sack racing. The minigame was a balloon toss in which participants threw balloons to their teammate with the hope that it will not pop. Cluster 10 won as Cluster 7’s balloon exploded in the thrower’s clenched hands. The next relay was a watermelon eating contest, balloon popping contest (in which the participant tries to pop the balloon that is tied to their back), wheelbarrow walking, and a crossword puzzle. After the second event, there was a trivia contest minigame. After it was a donut eating contest, and then spoon egg race. A sprinting competition was followed by cup stacking and demolition by blowing a balloon. The minigame was making a marshmallow tower with the tallest winning the competition. The last relay event started with eating an oreo on your forehead using only with your facial muscles, using a sponge to transfer water to a bucket, bottle flipping, and a three-legged race. The day ended with “the hunger games,” where two people from each cluster had a balloon tied to their arms and tried to pop the other people's balloons, until only one is left. ​ 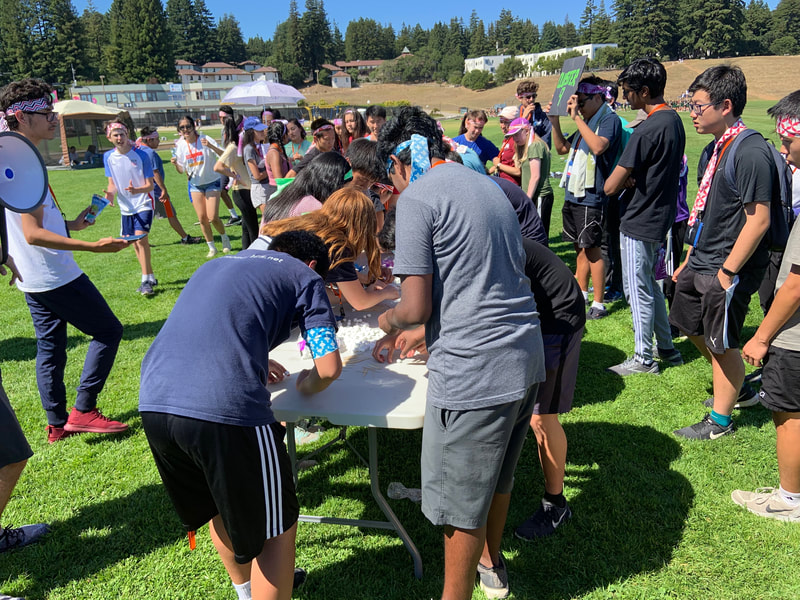 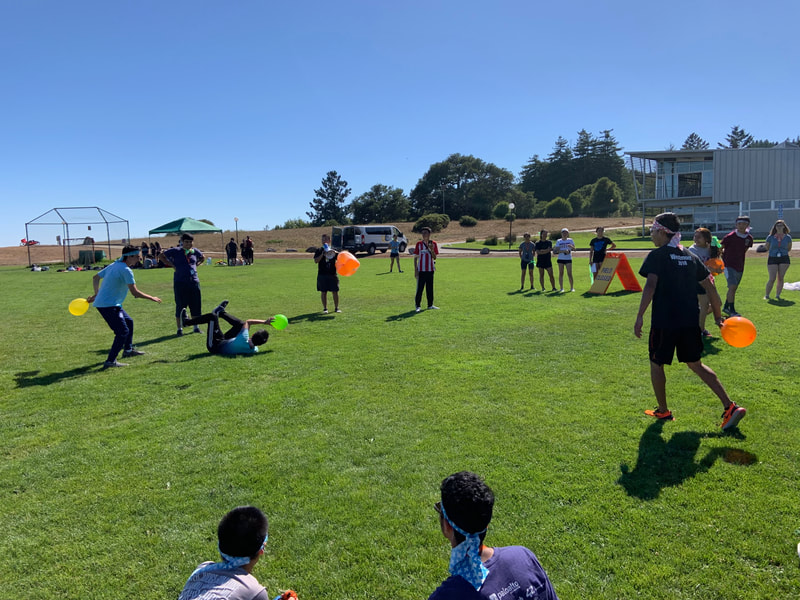 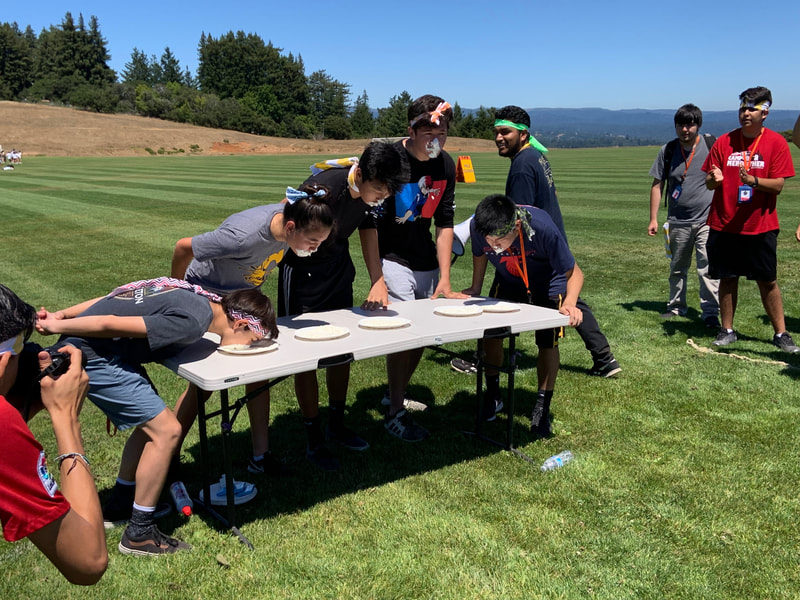 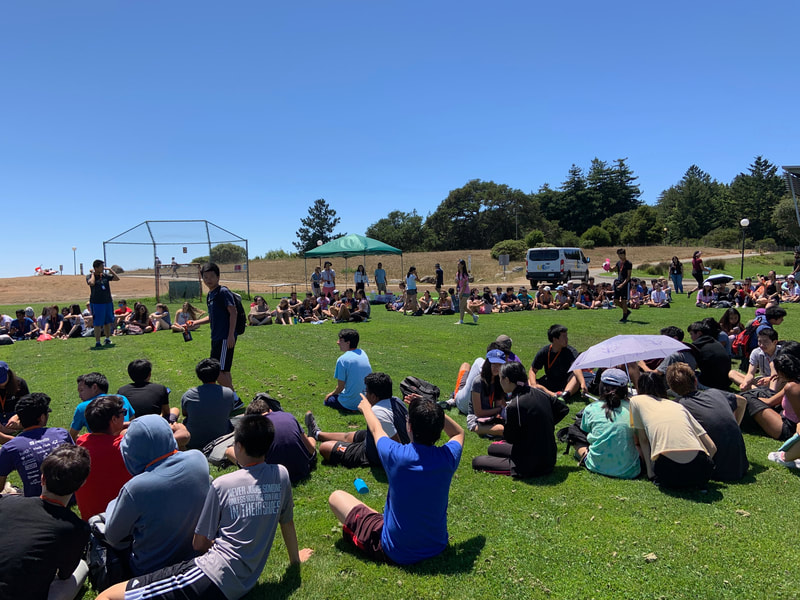 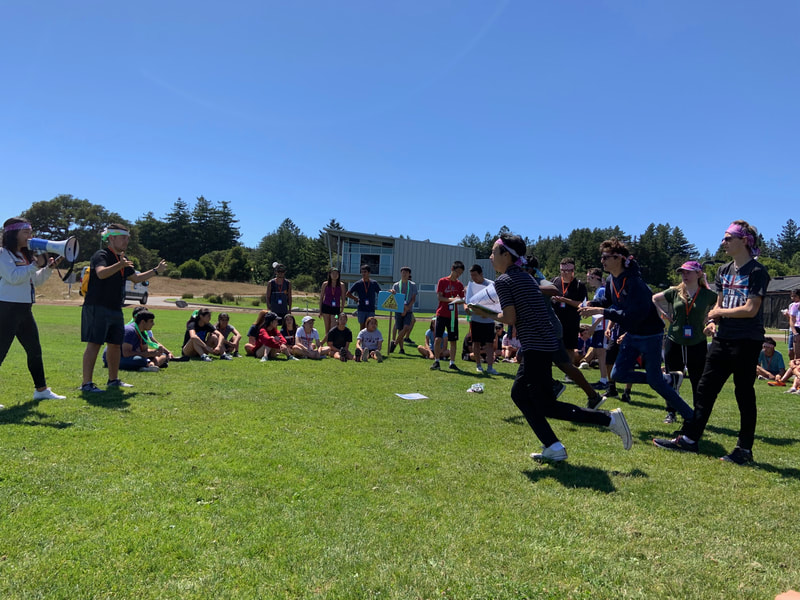 As many of us know, this year is the twentieth anniversary of the UCSC COSMOS program. To celebrate, the COSMOS staff have decided to put on a free concert in the Quarry, with one of the program’s alumni as the main event. Matt Jaffe is a singer/songwriter who grew up in San Francisco, and attended COSMOS in 2011. His path to music was shaped by Jerry Harrison of The Talking Heads, a band that played in the late 70’s to the early 90’s. And now, eight years later, he has come back to COSMOS to play for us. Going into the night, none of us had any idea what to expect. Raul came out on stage, gave a quick introduction, and then Matt began to play. On the first song, Matt played one of his originals. It was an enthralling mix of country and rock, and was a perfect start to a long night of songs. Before his next song, Matt explained how he was inspired by a movie to make what he was about to sing. The music itself had an extremely catchy chorus, while still retaining the story behind the song. His next tune was dedicated to a friend of his dealings with a second bout of cancer. The personal experience behind the song, as well as the acoustic background, made for an incredible harmony. After hearing the inspiration for the song, a lot of the lyrics made sense. For example, “Running up and down the California coast” was a reference to living in California. The main chorus of the song about “Spreading all these rumors of your ghost” is also in reference to his friend which makes the song that much more emotional. A few more songs passed, and a common theme started emerging. A lot of the songs were either made based on personal experience, or movies. A lot of the songs also had an instrumental portion. These stylistic choices made for a very interesting show. After a few more original songs with varying inspirations, we finally came to the cover song part of the show. His first song by another artist was “Folsom Prison Blues” by Johnny Cash. The cover was an interesting rendition of the song, especially since Matt’s voice is a little higher than Cash’s. After the song, Matt interacted with the audience a bit and revealed that he was a part of Cluster 8. To this revelation came a resounding applause from said cluster, and it was discussed how they were in fact the best cluster. Soon his next song had begun, “Hellhounds of Alcatraz” which was an original song by Matt Jeffe. This song had a very catchy tune, and was a great addition to his performance. His next tune was intended to be happy, but like all musical artists it ended up turning out slightly angst. Despite his description of the song, it was a crowd favorite. The combination of the lyrics and tune made for a very soothing song, and everyone can agree it was probably one of the best songs that night. Another good song that night was called “Broken Flowers” and by the end of the song some of the clusters were singing along to the chorus. Next Matt played a song called “Raise the Dead” dedicated to those who died in the Pulse night club shooting. The song had a somber tone, and many groups started swaying to the song and singing the chorus. It was another highlight of the concert. By this point some of the audience members were having fun singing along to the lyrics on their phone for recognizable songs. Near the end of the concert, Matt asked everyone to come down to the front. Soon enough we had a small campfire circle. After performing one of his originals, Matt started accepting audience requests. These included “Be a Man” from Mulan, to “Over the Rainbow”, and even a few older songs like “Radio Radio”. One of the highlights was when we sang “Delilah” written by Tom Higginson. Matt knows Tom, and so we recorded the entire song along with us singing to send to Tom. Soon the night had come to a close, but this wasn’t without giving Matt a warm goodbye and a little bit of merch sales as well. Overall, the night was a memorable experience for everyone who attended. Happy twentieth anniversary COSMOS, and thank you to Matt Jeffe for coming and playing for us here at COSMOS. ​

Last Sunday, we had the opportunity to go on a hike. However, it wasn’t just any normal hike. Instead, it was filled with scary stories. Before heading to our demise, we were able to see a beautiful orange sunset. Not long after, we were walking down to the woods, becoming more apprehensive with every step we took. What made it worse was that an ominous fog was creeping up to us.

Next thing we knew, the woods were completely dark and we were sitting in a circle, telling stories. We began with a few funny stories such as the “viper” story. However, the fun and games soon ended when Victoria took the stage. She began with a spine-chilling story about a crack in the wall and a ghost woman. After she revealed the plot twist, everybody started screaming for a solid minute. However, things were about to get worse. While Victoria was telling her second story, we heard a twig snap in the distance. We shined our flashlights into the woods. Nothing. Then, as Victoria continued her story, we heard another twig snap followed by hurried footsteps. We all screamed “STOP!” In fact, my friends and I got so scared that we started huddling in a tiny group. As the story continued, things got more tense. Suddenly, I heard an ear-splitting shriek from a group of students. A mysterious figure jumped out of the woods. I screamed and waited for my eyes to adjust. Turns out that the figure was indeed LUIS. Luckily for Anthony, the Cluster 10 RA, he was listening to music with headphones the whole time so he didn’t get jump-scared.

When we walked to the cat shrine, we were all pretty shook. At this point, we would scream whenever anyone said “dark” or anything remotely scary. During one of the stories, we heard a strange dripping sound. It didn’t make sense. Why was there water dripping in the middle of the woods? However it kept going, filling the air with dread. Suddenly, a light turned on and we saw that it was Luis making the sound.
​
The scary stories coupled with Luis’s notorious behavior truly made this the scariest hike I’ve ever been on. Yet, many would also say that this hike was truly a great bonding moment. Would I recommend it? Well, just make sure you don’t have class the next day.