Raise your hand if you still have the guts to read about this topic again! No one? That’s what I thought.

This Monday, COSMOS students walked out of the dining hall prepared for their usual run-of-the-mill discovery lecture. You could imagine what they expected — one of those lectures where they could stare at their phones, pay attention and take wonderfully detailed notes they would never review, or conk out completely and catch up on some of that precious sleep that has been so rare and coveted as of late. However, barely a minute in and every person whose head was tilting downwards to play Pokémon GO, tilting downwards to take notes, or tilting downwards to satisfy their circadian rhythms was perked up and ready to throw up as Dr. Alison Galloway gave everyone a mind-bending and stomach-twisting introduction into the science of forensics.

Galloway began with detailing the stages of decomposition, which ranged from recently deceased farm-to-table bodies to skeletal decomposition.  When a person first dies, their body experiences steady temperature loss and occasionally rigor mortis, or stiffening of muscles (sometimes so severe that a body can be placed on two chairs and not slump between them). After a few days, the body starts to bloat, and fly maggots start to consume its flesh. In addition, pulling on part of the body’s skin can lead to exfoliation, or the pulling off of a large amount of skin. Post-bloating, the skin can rupture from gas bubbles, become slimy, or saturate the soil under it with bodily fluids.

During advanced decomposition, any hair becomes significantly more visible as the skin dries and shrivels up, peeling back from fingernails, teeth, and other body parts. Mummification starts shortly after, given the right conditions. In this stage, every part of the body is drying, including the skin (which can vary from thick to thin depending on the humidity of its surroundings). After mummification, the body decomposes to the point where little to no flesh remains.

​After describing every stage of decomposition in detail, Galloway explained why forensics matters and how she fell in love with the subject. Understanding the state of a dead body is crucial to determining when the person died, which in turn may be pivotal evidence in a court battle. And though her work may be traumatizing and grueling at times, Galloway finds solace in the fact that her work brings justice to those who would otherwise be treated unfairly by the judicial system, for better or for worse.

After Monday’s fascinating lecture on death and decomposition, Steven Haddock of the Monterey Bay Aquarium Research Institute gave students a merciful rest from the somewhat revolting topic two days before. Instead of grabbing people’s attention and guts with the stuff of horror stories, the marine biologist enlightened a weary COSMOS audience with the pure beauty of ocean life.

Haddock didn’t hesitate to commence his talk by calling out some of the more prevalent and astonishing misconceptions about marine life, such as the ignorance by most of the population to the fact that 93% of the earth’s habitable volume is deep ocean. In fact, the vast majority of marine life is found permanently residing in depths far below the surface. In addition, while many people find deep-sea life as revolting as decaying corpses (given news of “invading” jellyfish in the media or terrifying pictures of angler fish or viper fish, etc.), much of the ocean community is in reality either benign and completely harmless (the jellyfish have been “discovered” to be “invading” in the same human-infested areas over and over, while those terrifying fish are mostly smaller than the size of your hand). Figure 01 illustrates Haddock’s argument that while science uses verified information (green, yellow), the media uses often misleading headlines for the sole purpose of grabbing the public’s attention. As this information becomes truncated and dispersed across social media, it morphs from a reasonable and logical descriptions of ocean phenomena into damning reports of jellyfish conquering the globe. The eerie significance of this model is that it is unapologetically harsh and yet empirically true for most of the human knowledge disseminated across the internet.

After admonishing the media as well as the general public, Haddock moved on to the mechanisms and applications of biological light. While many people confuse bioluminescence and fluorescence, they are separate phenomena with no relation to each other. Bioluminescence is the production of light through chemical reactions inside the cells of organisms. An observer does not need an external light source to view this kind of light emission; however, fluorescence, the emission of light through electrons losing energy inside atoms from an inanimate substance, requires at least a dim external light source to observe. Both are used by animals to attract prey or defend themselves (figure 02). This feature is common in many organisms, but most, such as humans, have no practical use for it.

The types of animals that Haddock studies are invertebrates like ctenophores (commonly called comb jellies) and siphonophores (commonly called siphonophores). You may know of ctenophores as transparent football-shaped jellyfish with lines of cilia that emit rainbow light. Haddock is sorry to inform you that they don’t actually produce the light, and that iridescence is from refracted light from the flashlights on submarines or the ambient light in aquariums. Aside from their extraterrestrial beauty, ctenophores are wonderful predators, eating virtually anything that fits inside their digestive systems.
​
Siphonophores are long chains of individual polyps (immature medusas, or jellyfish) that have specialized functions like digestion, reproduction, or swimming. They have often been portrayed as colonies, but act more like a single organism, even possessing an inter-polyp nervous system. Some can reach lengths of 50 feet or longer.
After introducing COSMOS to the inner workings of the 93% of the world comprised of deep ocean, Haddock explained the importance of bioluminescence and fluorescence in the biotech industry, serving as markers for important chemicals or fluids. This burgeoning field may eventually save one of your lives, which is saying a lot for something inspired by invading jellyfish. And that’s just a small fraction of how awe-inspiring and salient 93% of the habitable volume of our planet really is. 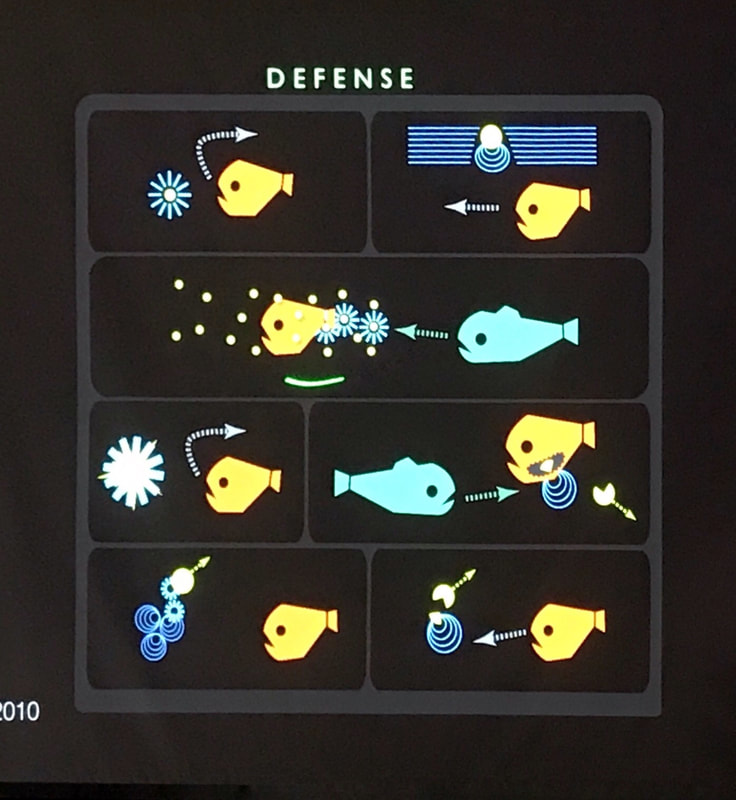 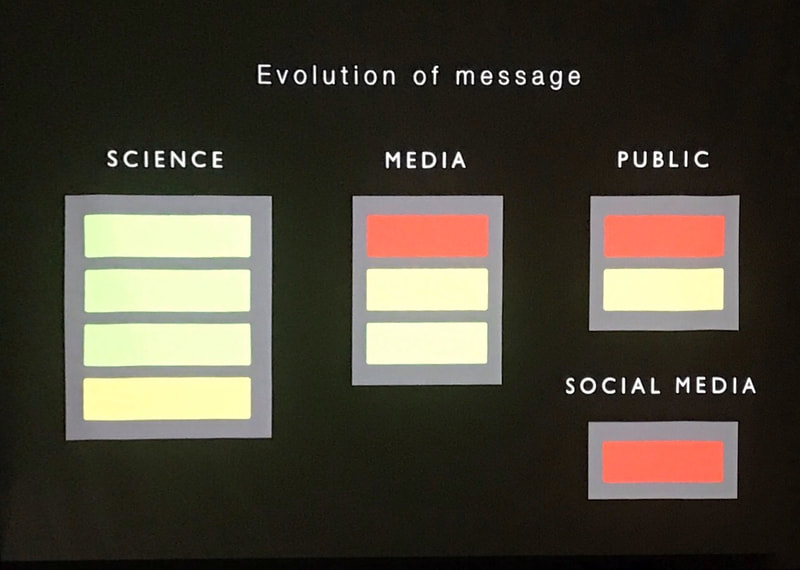