Every week each cluster writes a small summary of their collective experiences and thoughts.

With week one of COSMOS laying down the foundation for future math lessons, Cluster 1 progressed into infinity week: a week focused primarily on the idea of infinity. We also learned about the types of sets that are countable using a concept known as bijection, proofs to show some sets are equal in cardinality (size), the Euclidean Algorithm to identify the greatest common divisor of two numbers, and so much more! In addition, our teacher-fellow, Sarah Rominger, held the first mathematics-focused Discovery Lecture in the history of UCSC COSMOS on Wednesday. A few of the topics covered were the Fibonacci Sequence, Nominalism vs. Platonism, and the Continuum Hypothesis. This week, we formed groups for our final projects and were given the opportunity to work in our teams at the McHenry Library. While the time remaining in COSMOS is finite, the lessons and memories gained here will stay with us infinitely.

From learning about new nano-particle concepts to creating cadmium selenide quantum dots, Cluster Two was busy this week conducting labs and touring NASA’s Ames Research Center in Mountain View. We started the week by learning about different material nanoshells and how absorption or scattering of light for a chemical solution is proportional to its concentration and particle size. The next day, we had a lecture from professor Dave Belanger, who discussed phase transitions and the magnetic properties of iron. This helped us understand our lab concerning synthetic gold and silver nanoparticles later that afternoon. On Wednesday, we learned about concepts such as semiconductors, lattices, and quantum confinement. We also visited the Science and Engineering Library to research our final project and to catch a rare Mewtwo on Pokémon Go! We spent our Thursday creating cadmium selenide quantum dots, and collected around forty-eight aliquots (samples) per group to examine how differences in particle sizes affect the color of the nanoparticles. At the end of the week, the NASA tour allowed students to explore the world’s largest wind tunnel and provided an in-person experience of new research, such as the Tensegrity Rover SUPERball, which is currently being developed for future space exploration. 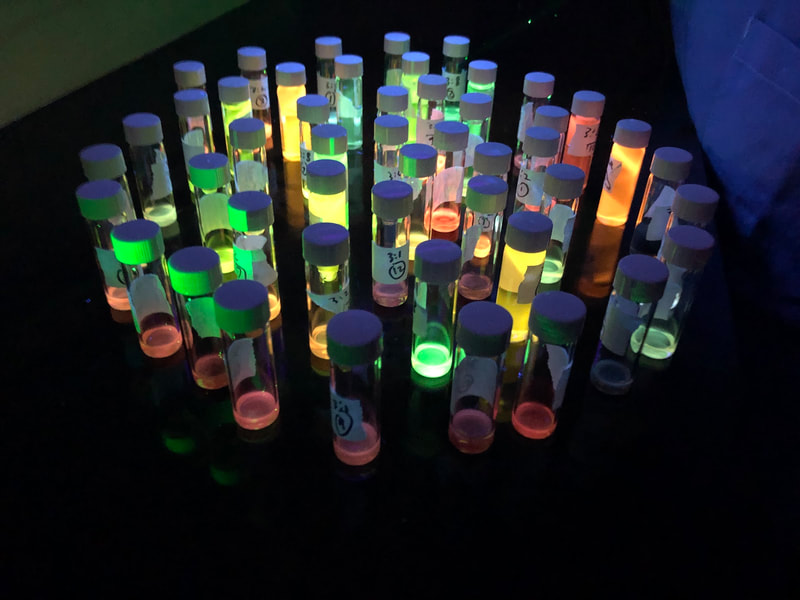 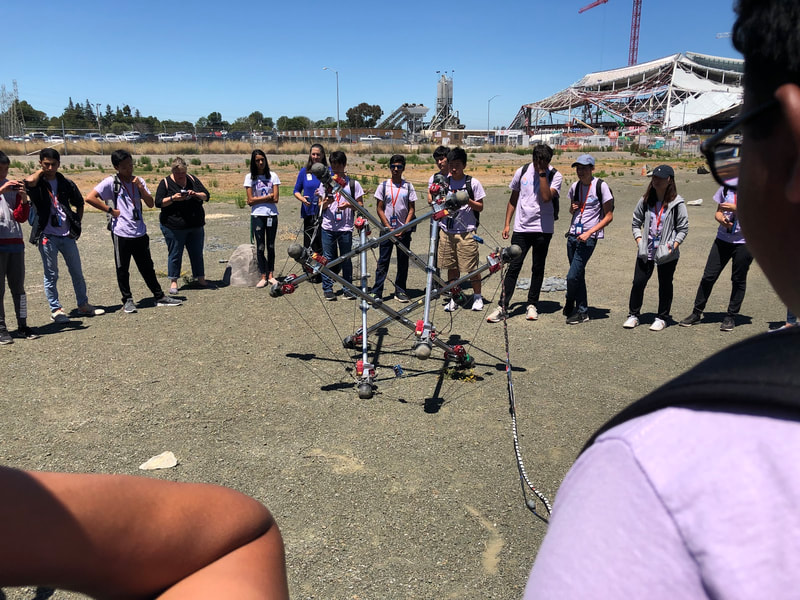 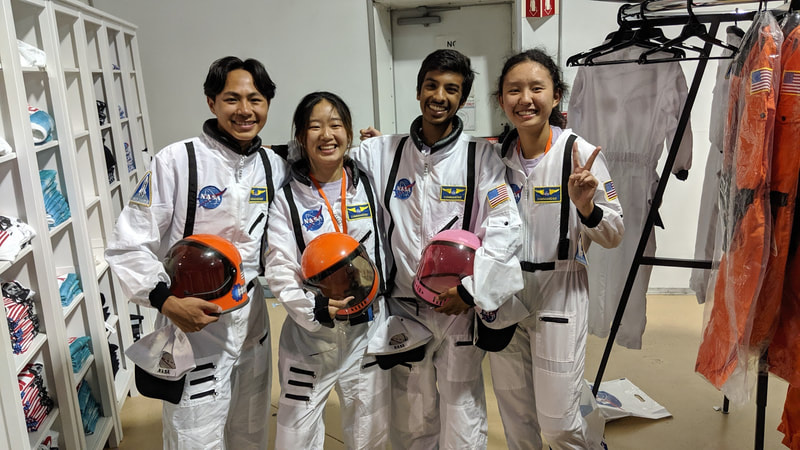 As you may notice by our abundance of purple shirts (and the cluster 3 kids doing their laundry every three days), cluster 3 goes on field trips twice a week, and this week was no different. On Tuesday, dressed in layers upon layers, we set out to kayak in Elkhorn Slough near Monterey Bay where adorable sea otters and enormous brown pelicans greeted us on the water. Our guides also showed us intriguing sea slugs, one of which spurted purple ink on us! This field trip gave us a chance to practice identifying birds, which connected to our lecture on Monday. We had another opportunity to ID birds we spotted while hiking through the nature reserve nearby. But the fun didn’t end there! On Thursday, we visited the Long Marine Lab with cluster 8. Beyond learning about skull morphology and looking at gigantic skeletons dangling from the ceiling, we were even able to watch two dolphins being trained! Although we were busy this week working on two projects simultaneously, we still had some incredibly fun adventures. 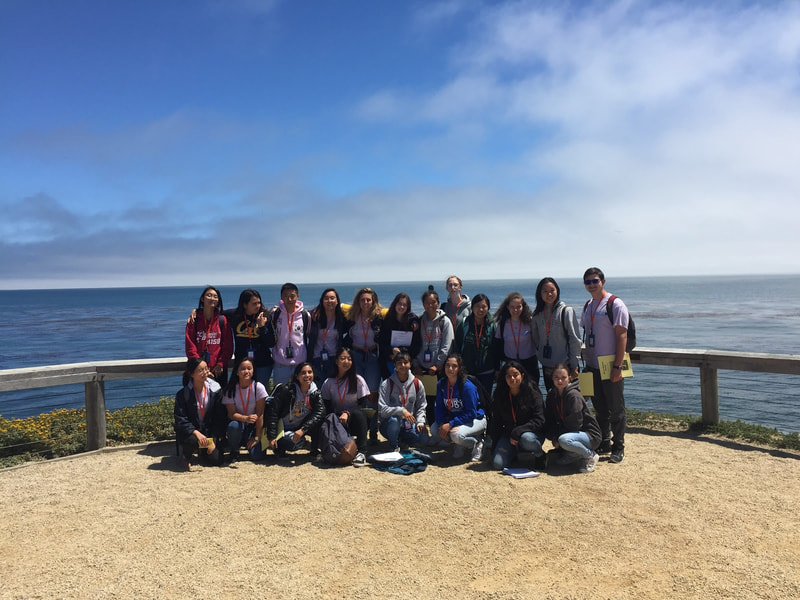 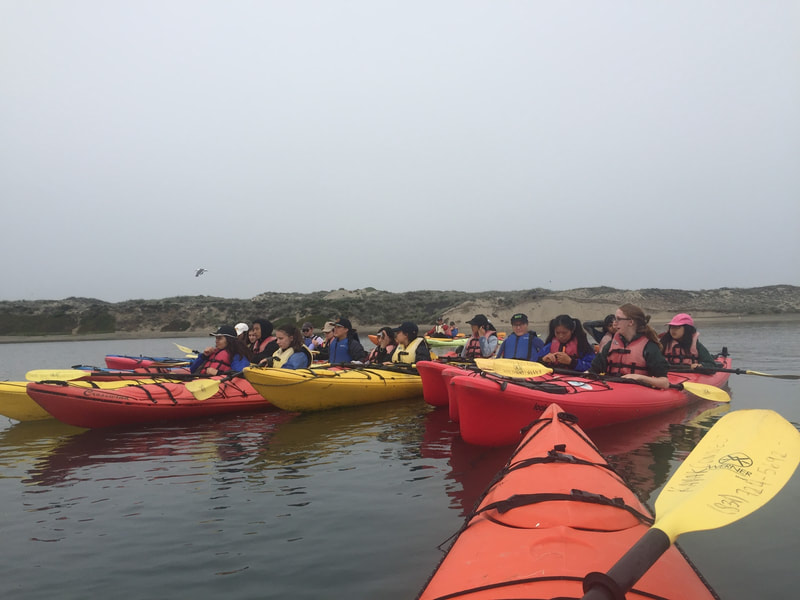 This week in Cluster 4, we focused on astrophysics- in particular, we continued research on our final group projects and made various field trips to learn more about the galaxy. On Monday, we took a trip to the Lick Observatory, where we toured multiple telescopes and were briefed about the history of its founder, James Lick, the founder of the observatory. Towards the end of the night, the tour guides let us observe at a star cluster, a binary star, and a planetary nebula through one of the telescopes there. We continued with a visit to the on-campus Center for Adaptive Optics on Wednesday, where we remotely operated the Nickel Telescope at Lick Observatory to take our own pictures of celestial objects. Throughout the rest of the week, we had lectures on the usage of telescopes, spectroscopy, and stellar life cycles. In addition, each mini-group began to research for their final projects. Each group is focusing on a unique aspect of astrophysics, including properties of galaxies, light, and dark matter. In particular, one group is experimenting with creating a light curve to resemble an eclipsing binary system, while another is researching the different colors and light emissions of globular clusters in the Antennae Messier 87 galaxies.
Next week, we’ll get back into learning more about nanophysics as a cluster, start work on our graphene nanodevices, and continue researching for our final group projects. 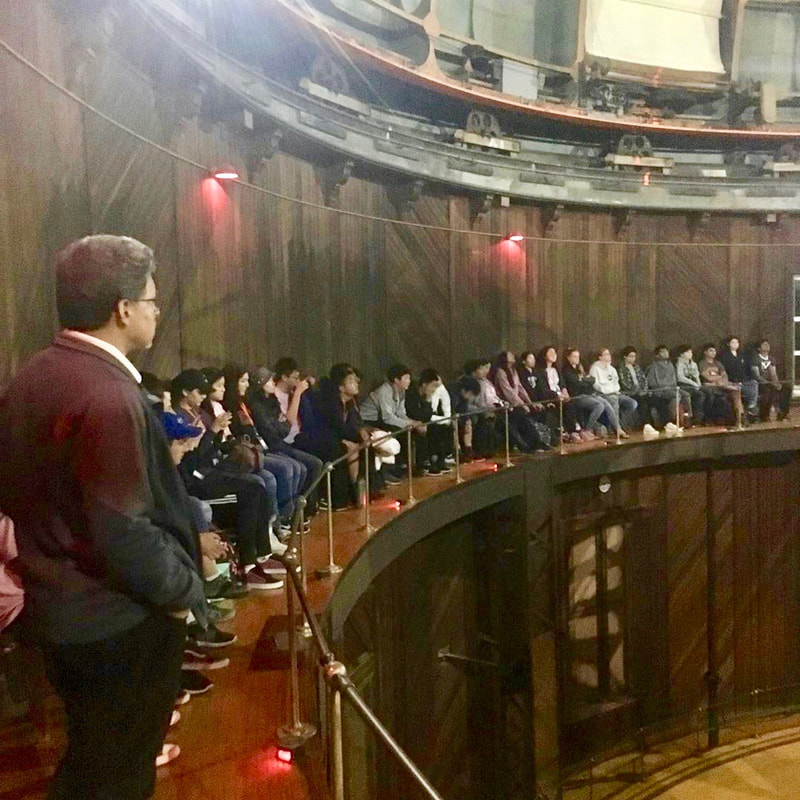 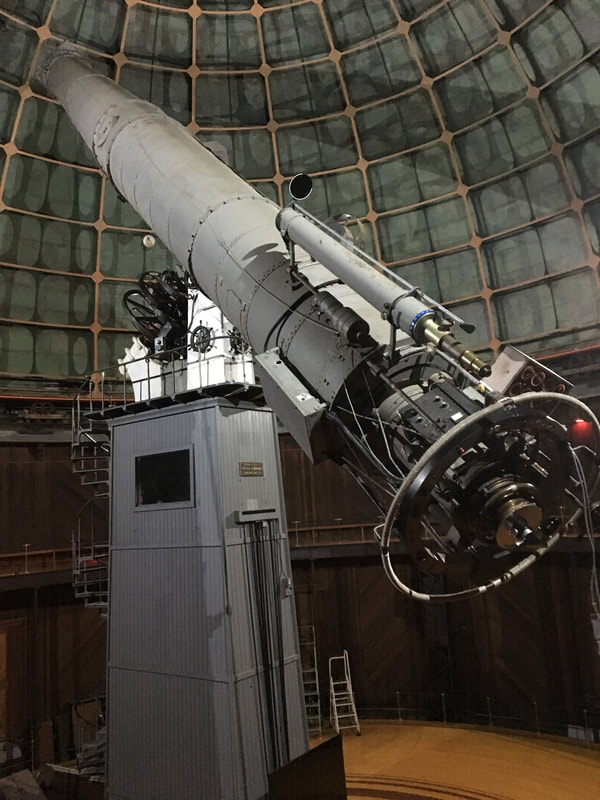 For the second week of COSMOS, Cluster 5 primarily focused on learning to use various game engines. With the knowledge of game design that we accumulated through the first week, we created three video games this week. We learned to use Twine on Monday, Unity on Tuesday, and more than ten game engines on Thursday. Our reputation as one of the most enthusiastic and engaged clusters was evidenced by our trip to the Santa Cruz Beach Boardwalk on Wednesday, where we played the arcade’s diverse selection of games, forming (and breaking) friendships as we competed against one another in multiplayer arcade games. Later, we combined our coupons to exchange them for a slew of rubber duckies, foam swords, and stuffed animals from the arcade’s prize selections. On Friday,we worked at lunch to create a game that would be meaningful for somebody we personally know. Although we definitely experienced our fair share of struggles, such as navigating Unity’s complex functions and creating an entire game in one class period, we managed to successfully complete these challenges with the help of our instructors — A.M. Darke, Marcelo Viana Neto, Hadiseh Gooran, and Jackie—and with our fresh batches of quality memes.
Reflecting on our time at COSMOS, it’s incredible to imagine that we’ve learned so much within two weeks—and yet it seems as if these two weeks have gone by in the blink of an eye. We congratulate everybody for surviving the first half, and to conclude this update on your favorite cluster, we’ll end in a fair warning: be prepared for the eye-popping, jaw-dropping, and heart-stopping games to come in our final weeks of COSMOS. 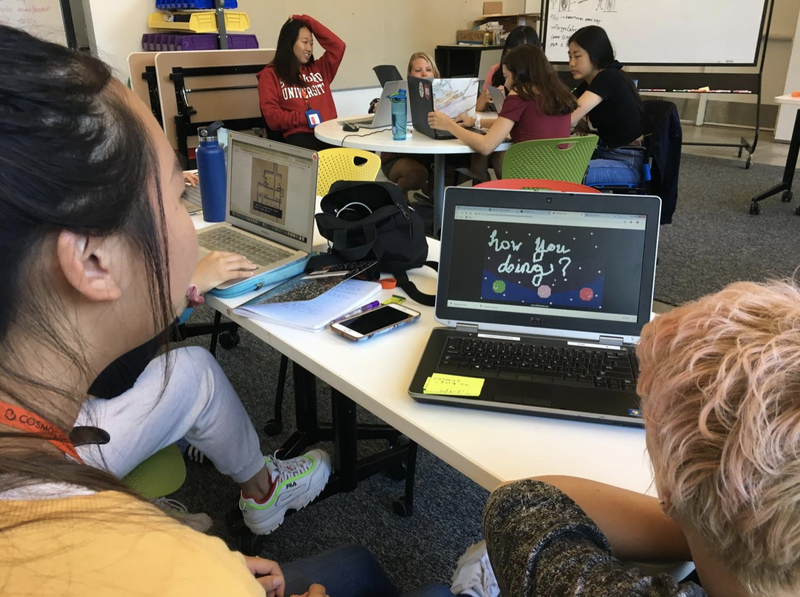 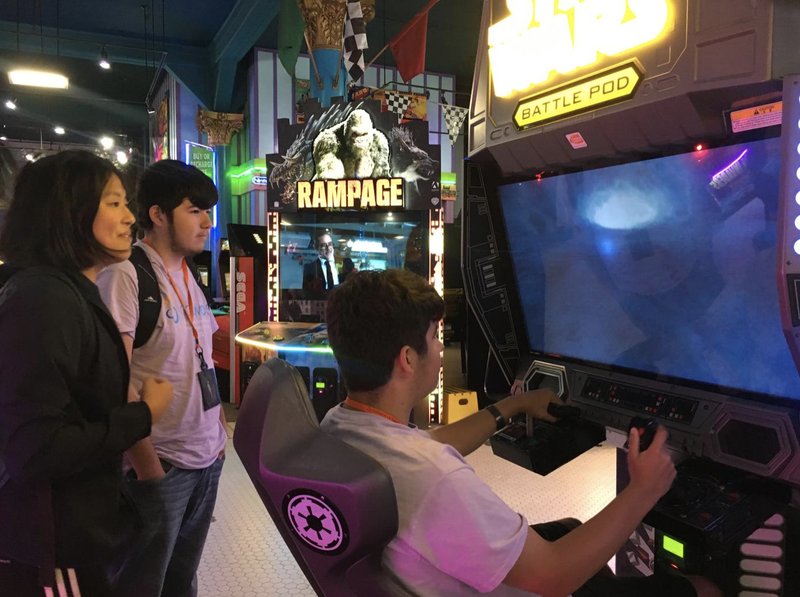 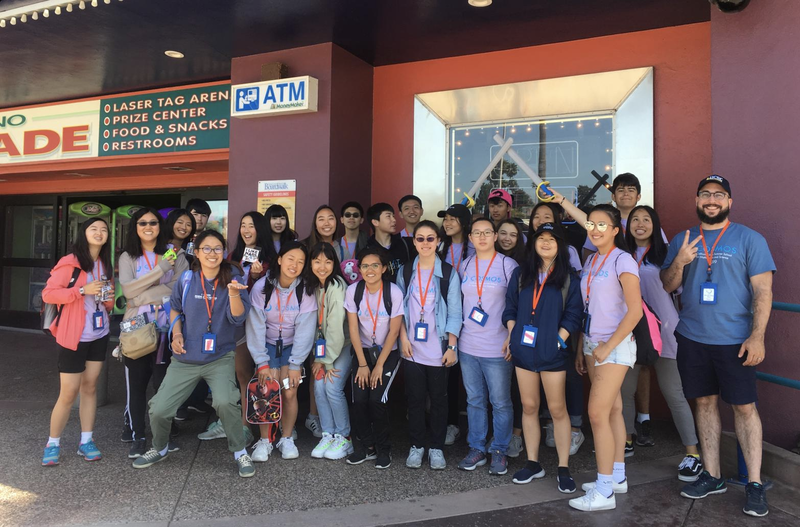 This week, Cluster 6 students have been working hard on their latest assignments! In our computer networking classes, we have started learning about transmitting information using digitization, sampling, and quantization. We’ve also learned that computer networking has many different layers, the backbone of these being the physical layer. Our cluster has also been implementing our newfound knowledge about binary numbers into these topics, focusing on “bits” and “bytes” along the way. In our robotics classes, we are continuing to work with our roach-bots, discovering more efficient ways to write and test code. In addition to learning about topics such as events and sequences to cause the roach bot to respond in a specific manner, we also learned about state machines. These diagrams help programmers plot their code out before they write it, and in using this process, we were able to think like professional coders and like our roach-bots with a roach maze simulation. Students formed human mazes and took turns pretending to be roach-bots, coming up with algorithms that would help them to navigate through the mazes while blindfolded. Soon, we will be using everything we have learned to create our final projects.

Cluster 7 picked up right where we left off last week. Using an immunoassay test kit, we tested our seawater and shellfish samples for domoic acid again in order to strengthen our results from last week. Everyone was exhausted after so much micropipetting, but we agreed that it was well worth it after an educational trip to Professor Raphael Kudela’s laboratory to measure our results.
We also continued our work on tracking the source of fecal coliforms in water samples, which we collected from the Santa Cruz wharf and the San Lorenzo River. We were surprised by how well the E. Coli grew on the mTEC plates and had a lot of fun using methods such as membrane filtration to harvest the microbes. Following this, we analyzed our samples using gel electrophoresis. Cluster 7 is looking forward to more days full of intensive lab work, informational lectures, and discoveries! 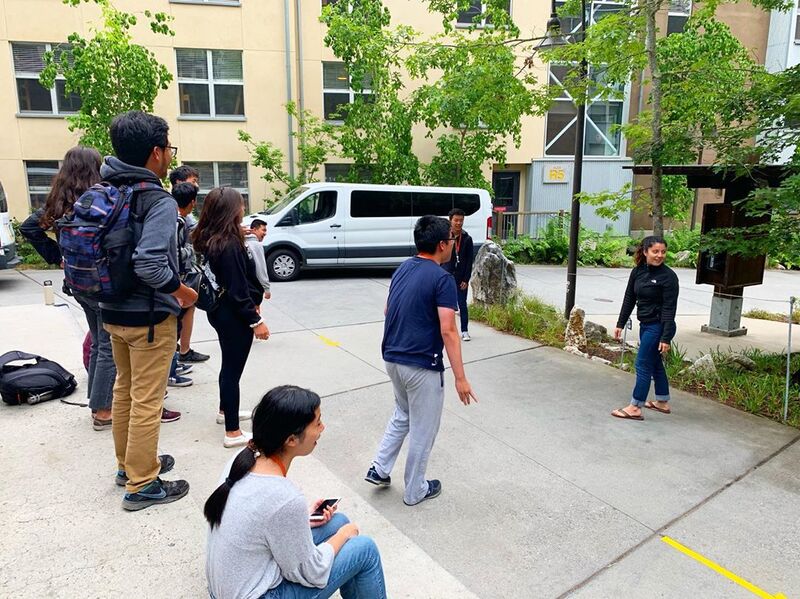 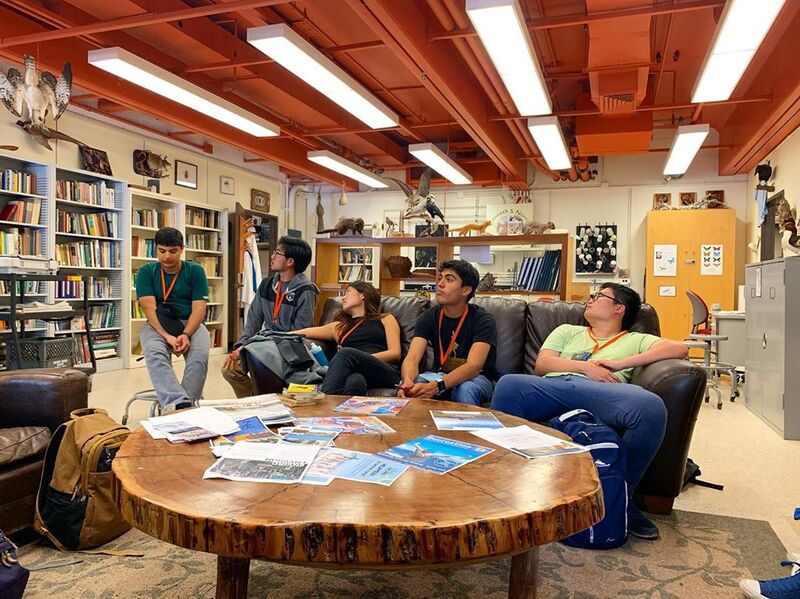 Cluster 8 hit the ground running during the 2nd week! Following a captivating lecture on zooplankton, we were delighted to collect phytoplankton with Professor Marinovic at the Santa Cruz Wharf. After observing chain-forming diatoms and dinoflagellates under the microscope, we heeded our instructor’s advice to never again gulp a mouthful of seawater. We also had the exciting opportunity to visit Long Marine Lab, where we conducted a lab on marine mammal skulls and watched trainers work with dolphins - it was thrilling to watch dolphins perform tricks and play with their toys, and we were especially amused when the dolphins stole a trainer’s hat. Finally, sleep deprived from working on our practice presentations and final projects, we were ready to relax and end the week by watching The Ultimate Guide to Dolphins, starring Professor Shawn Noren. 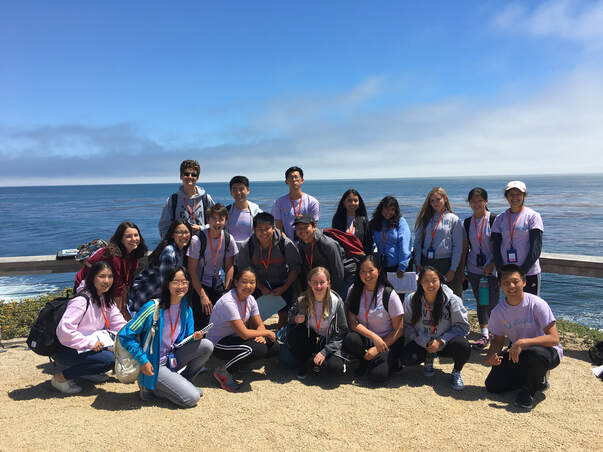 This week, Cluster 9 shifted away from programming and took a closer look at the general concepts of Machine Learning and Natural Language Processing (NLP). We started with learning about a basic linear regression model and how we can understand multi-dimensional data using one dimension by predicting values. Next, we learned about logistic regression, a function which returns binary outputs based on a predicted probability. Lastly, we dove into Neural Networks, and through a series of lectures and videos, we're able to gain an understanding of how exactly machines are able to “learn” from sets of data-- not because of magic and pixie dust, but because of calculus. Meanwhile, on the NLP side, we learned about many of the subproblems that exist within the main problem of getting a computer to understand a natural language, including extracting features to understand sentiments in text and expanding our understanding of machine learning to different languages. On Friday, we picked our final projects and began the process of data loading and processing. We will devote most of next week to our projects and hope that we can practice the skills we learned from class on real-world applications!

The second week of cluster 10 started off with Professor Oye giving an explanation about the machines we saw on our field trip last week to IBM. We briefly went over materials characterization and processing before diving deeper into the mechanics behind flash memory. Aside from our daily lectures, we began to work on our final group projects with research topics varying from quantum dots to STT-MRAM. We spent a lot of class time collaborating with our group members and reading up on our topics. On Thursday, Professor Oye created a game for us in which we got into our project groups and had to find the solution to a problem while working with limited communication. The letters A, B, C, D, and E were assigned to us by seat, and the goal of the game was to find the common symbol between all five people in our group. However, the catch was that only person A knows what the actual question is, and person B is the only person who can pass notes to A, C, D, and E. Although it was somewhat confusing, two groups managed to complete the challenge. This game simulated the communication difficulties between higher and lower levels in a company, and it was a very exciting and intriguing way to understand more about the real-life dynamic of a workplace. ​ 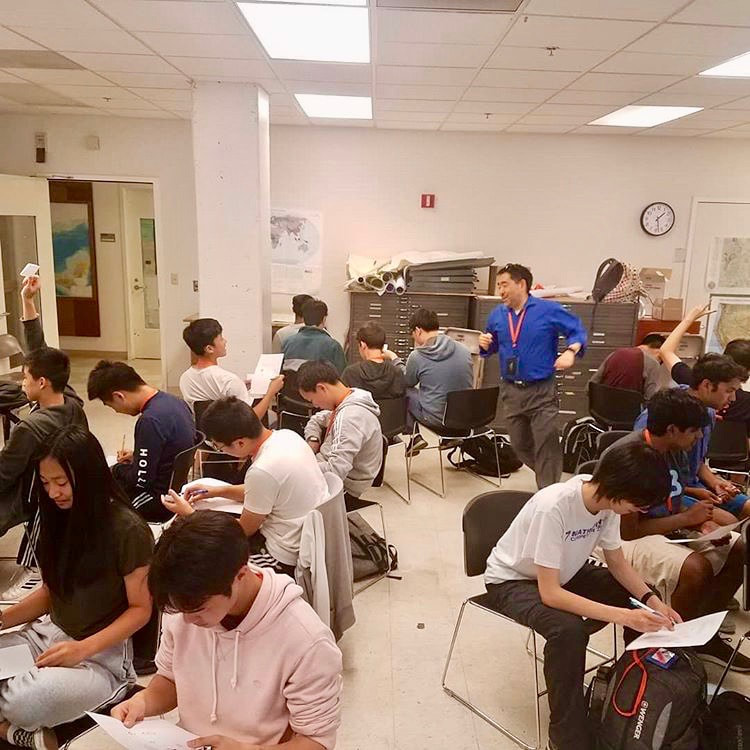 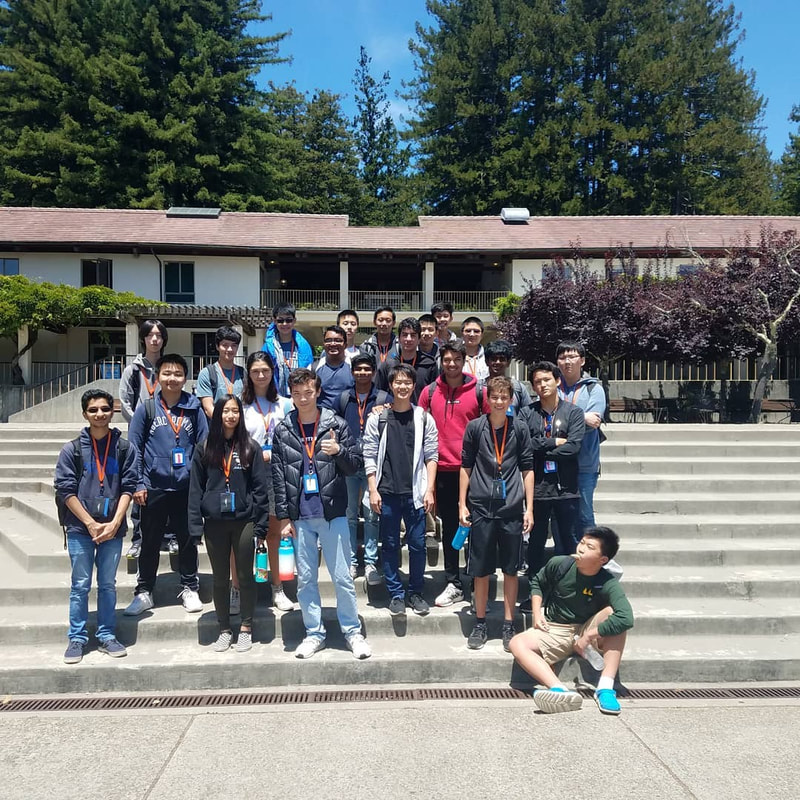