Every week each cluster writes a small summary of their collective experiences and thoughts.

​During the third week at COSMOS, Cluster One delved into more complex concepts, some of which included Cantor’s Set, the Chinese Remainder Theorem, linear modular equations, and the ‘Bruh’ Theorem. Particularly, the Cantor’s Set is an uncountable set where the middle third is removed, leaving behind two sets that repeat the process. We then learned that the Cantor’s Set connects to the Devil’s Staircase, a function consisting of values removed from the standard Cantor’s Set. As a break from lectures and final project, we held our first cluster field trip on Wednesday where we watched Green Book and snacked on popcorn, fruits, cookies, and more. At the end of Friday’s class, we compiled a list of all the numbers we could make with four 4s and any operation. The class soon escalated into a chalk war as the chalkboards, hair, and shirts of students alike were covered in white powder. 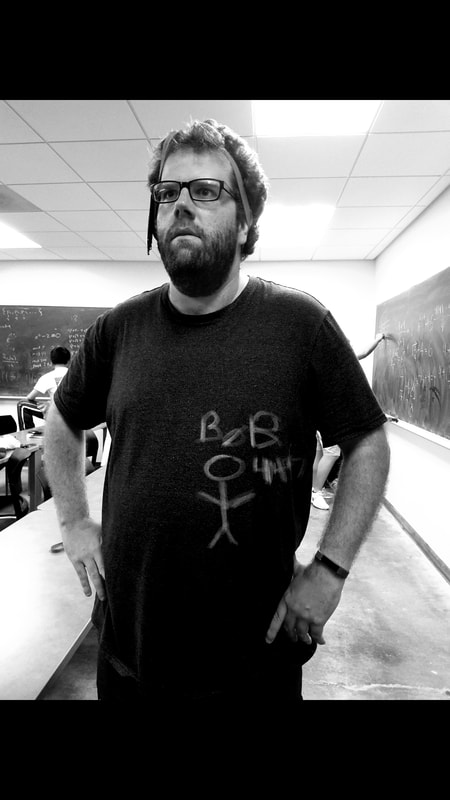 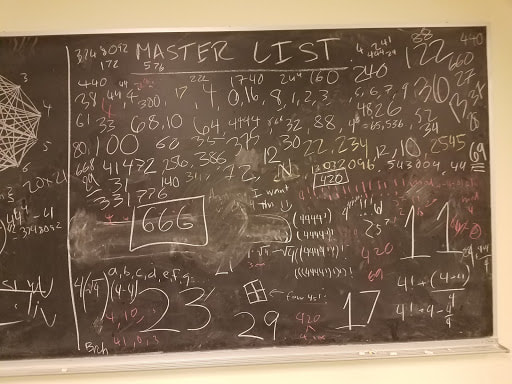 After finally returning to our regular sleep schedule, Cluster Two focused entirely on completing labs and having the opportunity to attend STEM-enrichment lectures at the Google Headquarters in Mountain View. On Monday, we explored the magnetic properties of Fe3O4 magnetite nanoparticles (MNPs) by creating ferrofluid, ferrogel, and magnetic ink. The next day, we synthesized zinc oxide nanoparticles, which we used to create sunscreen and explore the usage of nanotechnology in cosmetics. On Thursday, in our last lab, we experimented with the anodization of bismuth pellets, oxidizing them through an electrolytic process. We noticed how when bismuth became oxidized, varying sizes of thin films appeared on top of the pellets, with each displaying different colors. On Friday, everyone was awe-struck by Google’s amazing campus, cafeteria food, and guest-speakers that stressed the importance of pursuing your passion and how the role of technology can expand your perceptions on solving world problems. Join us next week when we set up our final projects involving the applications of nanotechnology being used and created in real-life. 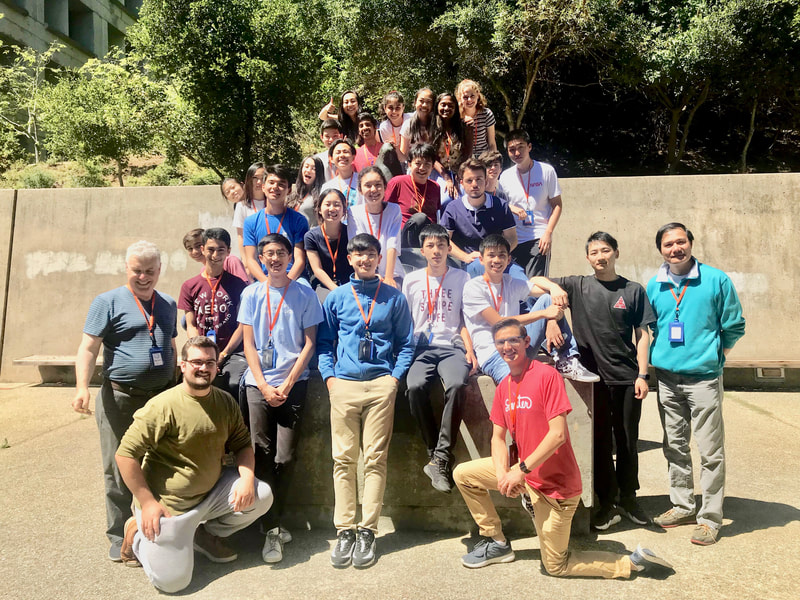 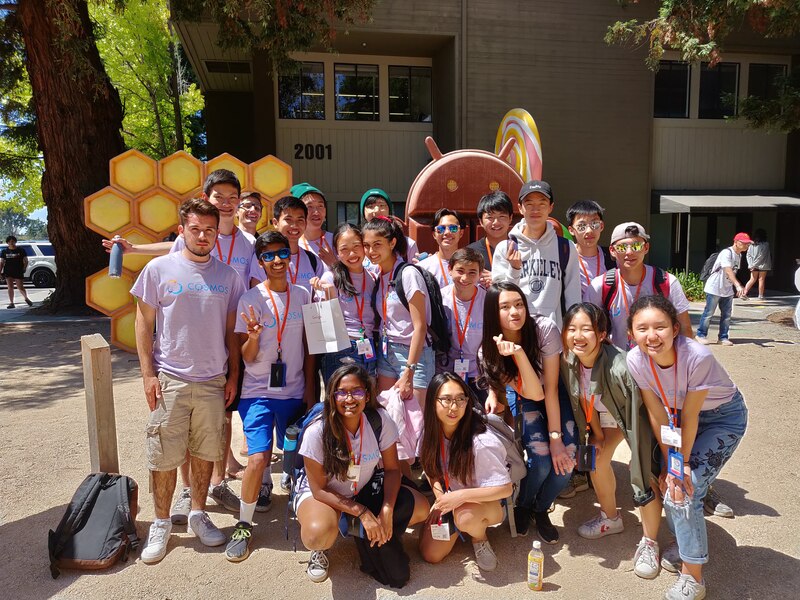 Cluster 3’s final projects are well under way, with every student stressing, whether it be about the aesthetics of their slides or the structure of their presentation. However, we still found time to have fun this week! After an interesting and informative lecture on mountain lions and how to track them on Monday, we drove down to Gazos Creek on Tuesday to test our tracking skills. There we saw all kinds of wildlife, from gulls to pelicans to snowy plovers! While at the beach, we searched for animal tracks in the sand, ranging from tracks of various birds to rabbits to small rodents. After attempting to identify the tracks, we tried to predict what the animal might have been doing there based on the placement and positioning of the tracks. Also, as you may have seen on the COSMOS Instagram, we found a dead sea lion after noticing vultures circling through the sky. After that exhilarating morning, our next destination was Big Basin State Park, where we looked for signs of wildlife. For example, our professor showed us a rabbit tunnel up the side of a steep hill that we could map. The habitat mapping was a relaxing end to a fun-filled field trip. The next day, we took a mini field trip down to OPERS, where we tracked the different behaviors of ground squirrels frolicking in the hills. Later, we had a lecture about marine mammals’ diving physiology. The next day, we visited Ano Nuevo in the morning to watch male elephant seals in their molting period, and observed a sea lion necropsy at Long Marine Lab in the afternoon. The sea lion that was being dissected had died of a shark bite and we watched as they took samples and photographs of various parts of its body. We wrapped up our week with an exercise lab and a rehearsal presentation of our final projects. 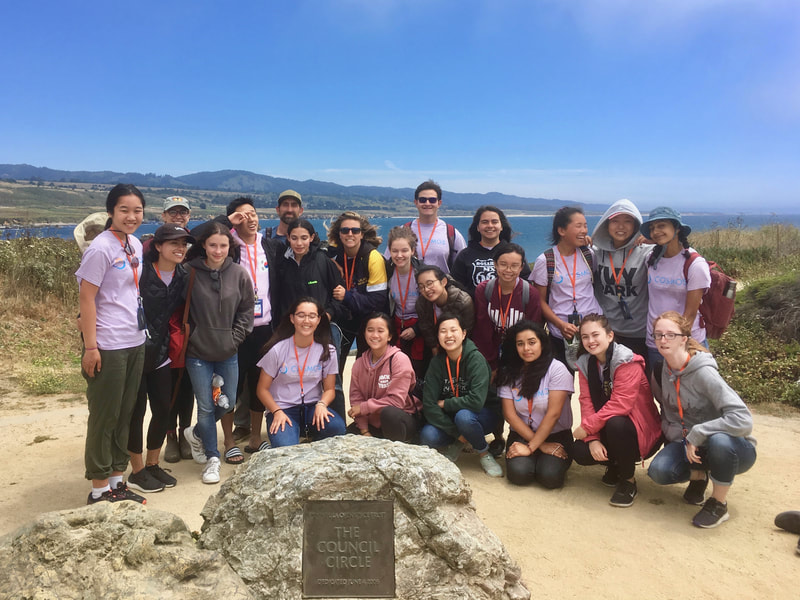 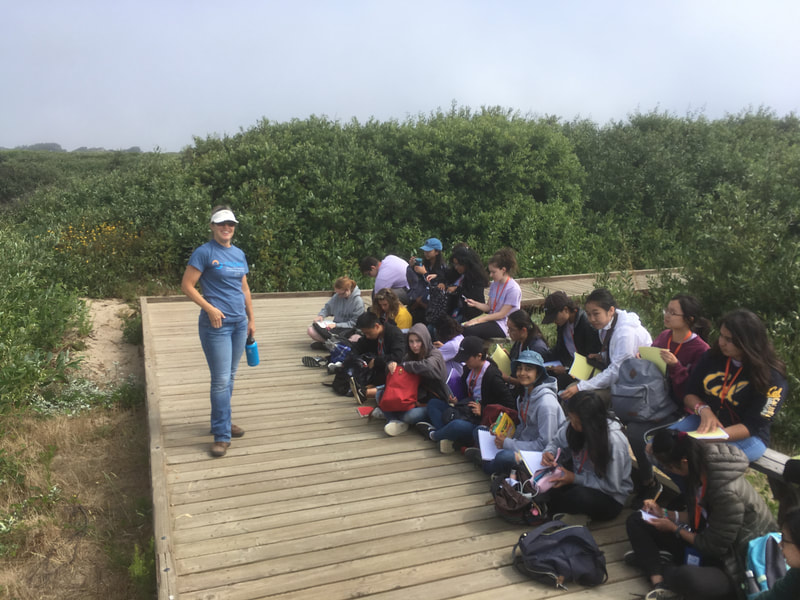 This week, Cluster 4 dove deeper into topics regarding nanotechnology and quantum mechanics whilst continuing to research their final projects in astrophysics. On Monday, we learned about the Eigenvalue Equation and practiced solving for eigenvalues and eigenvectors using matrices and vectors. On Tuesday, we had the chance to visit the Berkeley National Laboratory to tour the plethora of technology used to create nanotechnology, which revealed the immense progress humanity has made in this area. Later, we reviewed the Eigenvalue Equation and applied it towards the superposition of two atoms. On Thursday, we went to the Intel Museum to learn about the development of our current chips and ended up visiting a boba store afterwards. By Friday, we combined everything we learned throughout these three weeks of COSMOS and started researching for our final projects in nanophysics. 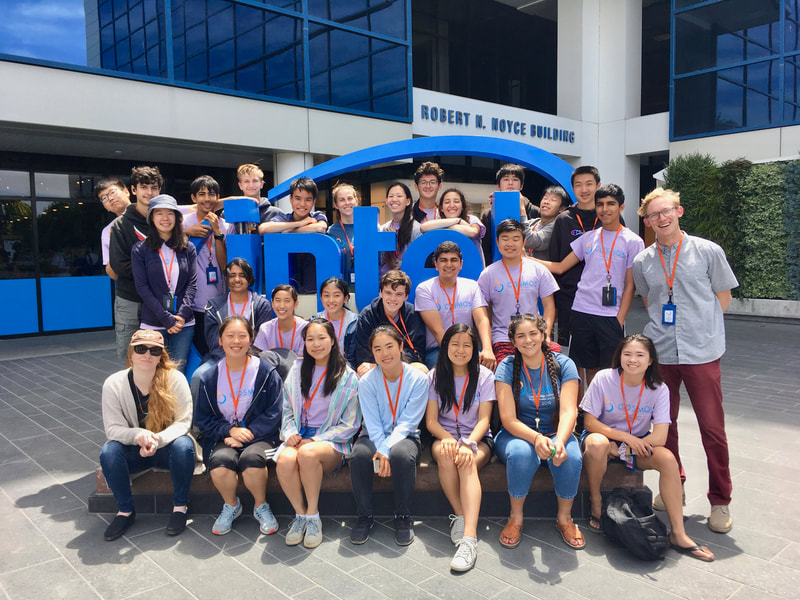 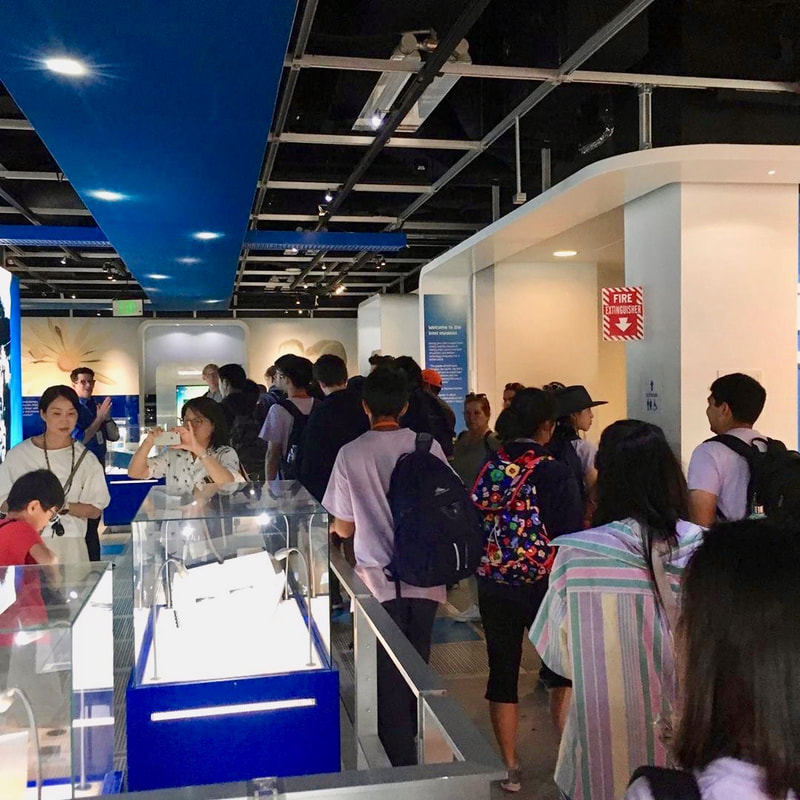 Ladies, gents, and everybody in between, your favorite cluster graces your presence today to bring an e x c i t i n g announcement: this week, we’ve kicked off our final projects. We’ve been divided into teams of one to three members, and each team is required to produce a full game within the last two weeks of COSMOS. Yes, the project is certainly daunting, but it’s the ideal challenge for the most brilliant and brightest cluster there is.
On Monday, we learned of various art programs, from creating pixel art with Piskel to animating with Adobe After Effects and Adobe Fuse, which marks the conclusion to our week-long exploration on various game engines and programs. We formed teams for our final projects on Tuesday by evaluating each student’s interests, ambitions, and skill sets. Wednesday and Thursday had been dedicated to physical and digital prototypes for our games, with our only respite being instructor Kara’s demonstration of her own quirky and games and instructor A.M Darke’s lesson on VR games.

To cap off the week, we visited a video game studio in San Francisco named Funomena where we engaged in a Q&A session with its employees and demonstrations of its VR games. The studio prides itself for straying away from the toxic components of the game industry’s culture, notably “crunch,” game design lingo for working overtime for weeks or even months on end. Rather than confining employees to strict job-description roles, Funomena encourages them to bring their own ideas to the table and explore creative endeavors and various skill sets for themselves. Instructor Marcelo Viana Neto commented later on that he chose for us to visit Funomena because he modeled Cluster 5’s class sessions on similar values.

Three weeks down, one more week to go. With our final projects underway, if you see your friendly, sleep-deprived, Cluster 5 zombies rise from their graves at 8:00 AM, DO NOT — I repeat — DO NOT greet us with the love and care and preferable hug that we all would need. Shake us by the shoulders, look us dead in the eye, and remind us that crunch is no good. Thank you for reading, and be on the lookout for our final update next week! 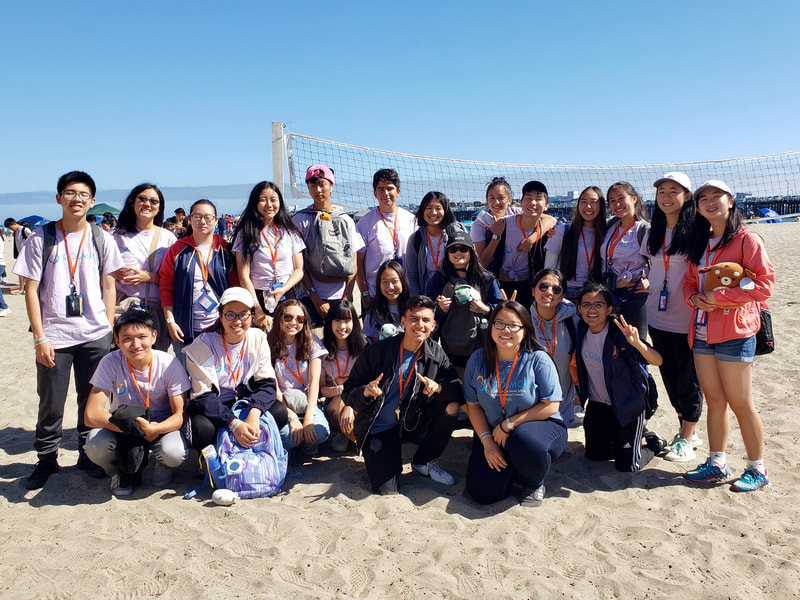 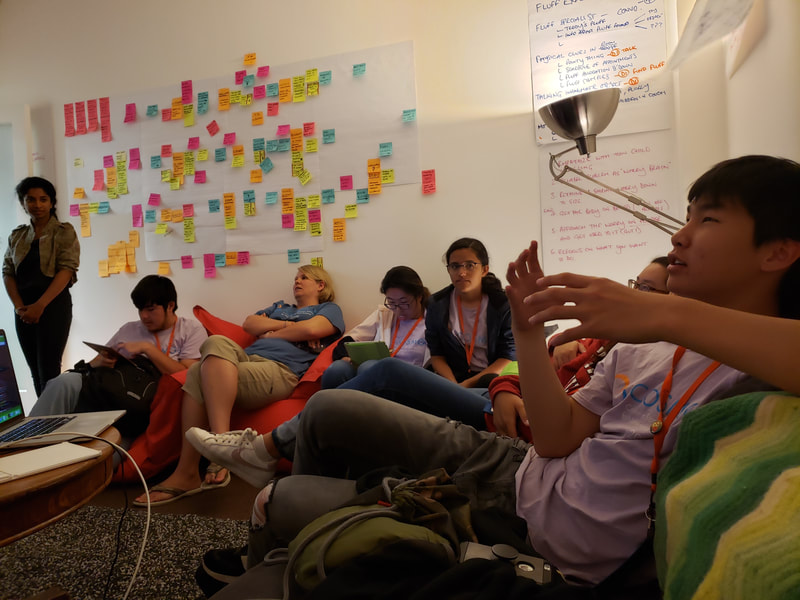 Cluster 6 is hard at work wrapping up our final projects! Our challenge is to make a roach bot go through a complex, changing maze, using a plethora of sensors and event checking machines. We’ve been divided into small groups to split up the roach’s tasks. This will allow us to fine tune our code and facilitate a workflow similar to that of  real programmers. As the days have gone by, we’ve tested our programs and spent hours editing them, focusing on the finest of details to ensure their robots do exactly what they want them to do. However, the grind doesn’t stop there. We are also working on presentations in which we’ll recap the process we went through of finalizing our code. We’ll also analyze the code itself and how it runs on our robots. Finally, we are also finishing up our websites that document everything we’ve been doing at COSMOS. We’re treating our robotics section as a “lab notebook.” However, for the computer networking portion of our sites, we’re doing research on any computer networking topic that interests us and writing about it. It’s easy to see that Cluster 6 has put an enormous amount of time and effort into their robot code, presentations, and websites, so make sure to check those out next week! 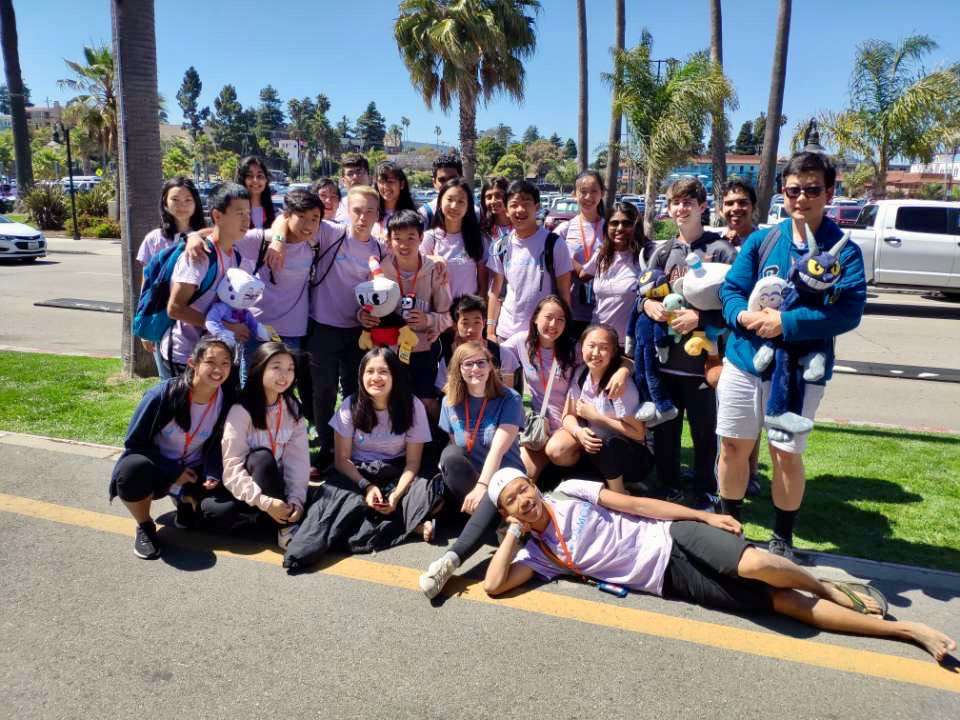 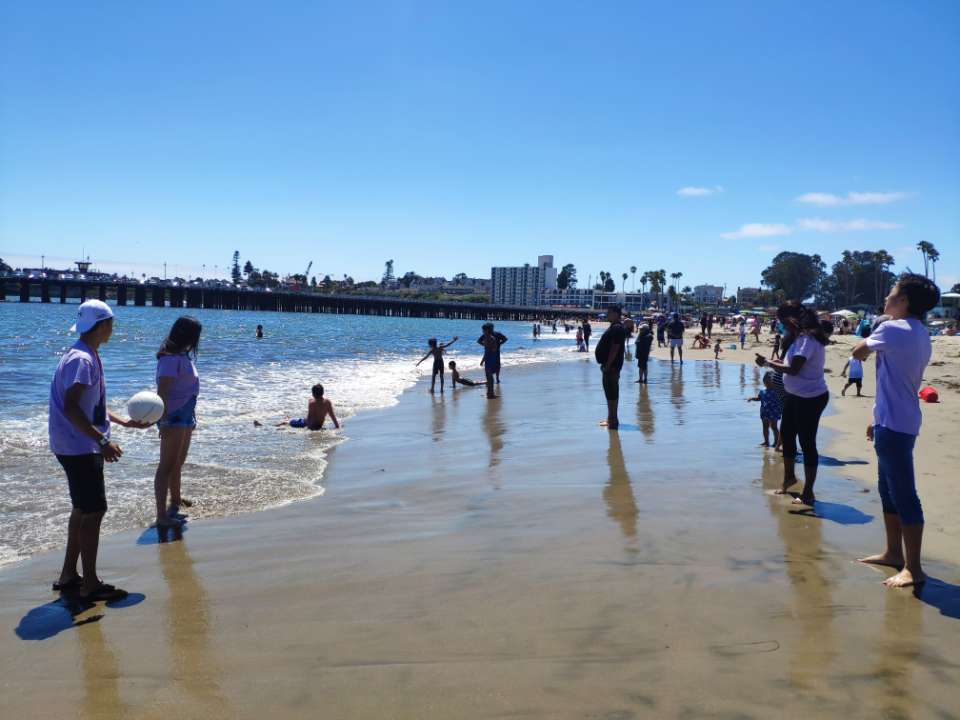 Cluster 7 kicked off week 3 by visiting the lab of one of our professors, Dr. Peter Weiss, where we tested for the presence of mercury in lichen as an indicator for mercury present in fog. In our microbiology class, we tested organic and inorganic produce to see how many bacteria were present, and how many of these bacteria were resistant to antibiotics. However, cluster 7 didn’t spend all of week 3 in the lab; on Wednesday, we visited the Seymour Marine Discovery Center and Long Marine Lab, the Santa Cruz Resource Recovery Facility, and the MBARD station. We were able to gather more data for our mercury analysis lab as well as learn more about the field of toxicology as we explored these locations, and we look forward to our final week of cosmos! 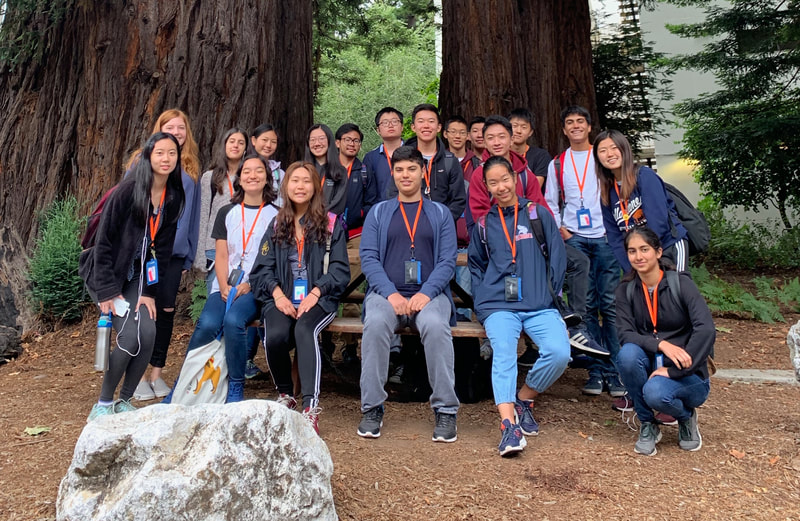 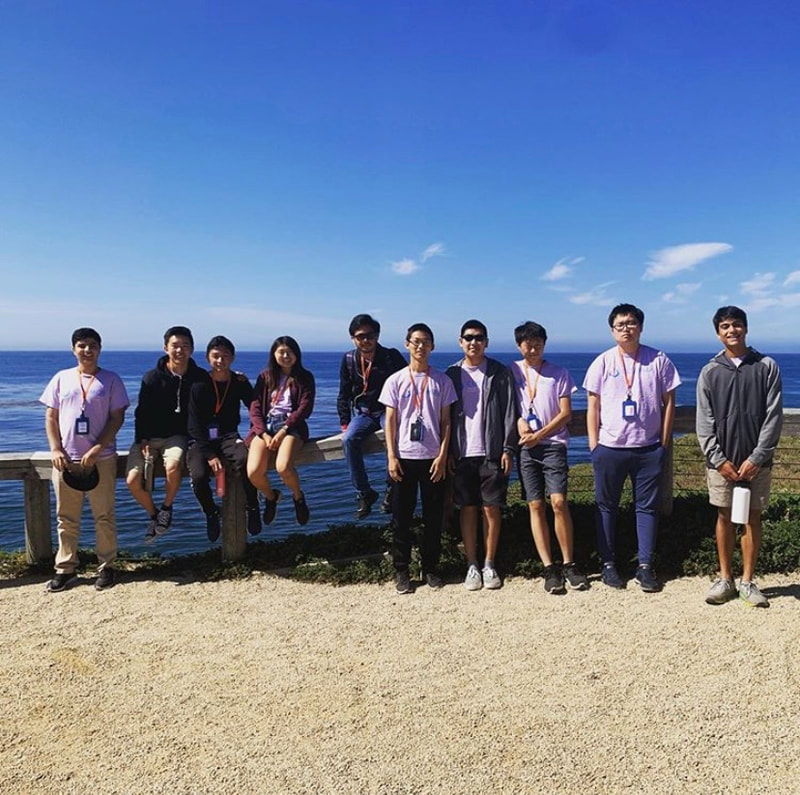 This week, Cluster 8 began to make exciting progress on their final projects! After spending countless hours perfecting our presentations, we were excited to take a field trip to the Monterey Bay National Marine Sanctuary Exploration Center with Professor Marinovic and Teacher Fellow Lindsay Shimasaki, where we were able to watch an amazing short film detailing the history of Monterey Bay and the unique species that inhabit its rich kelp forests. More hands-on experience followed, as we got the opportunity to observe a sea lion necropsy, which gave us a fresh perspective on the special adaptations of marine mammals that give them enhanced physiological capabilities. Professor Noren’s lecture at Año Nuevo State Park added to our observations of elephant seal behavior. We finished up the week by presenting our power points to fellow students, teacher fellows, and Professor Noren to polish and review our information. Cluster 8 is ready to dive into Week 4! 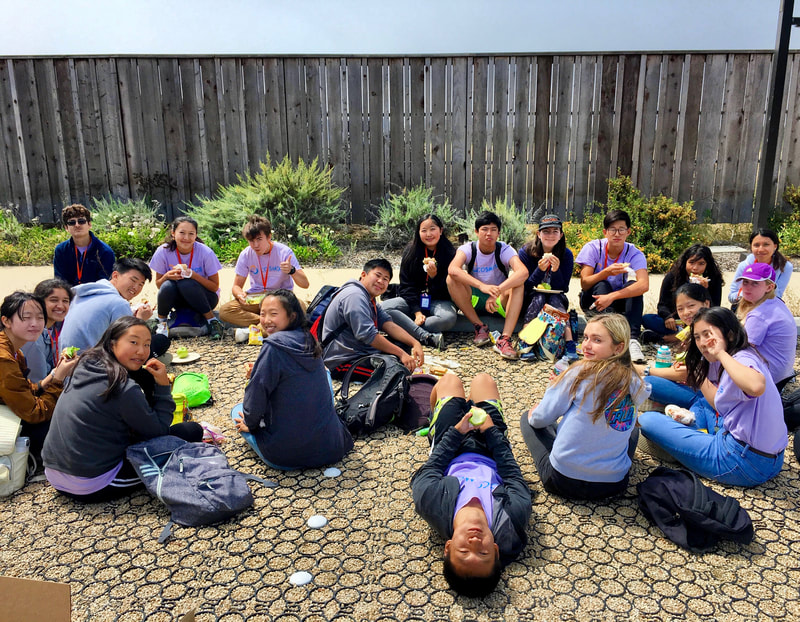 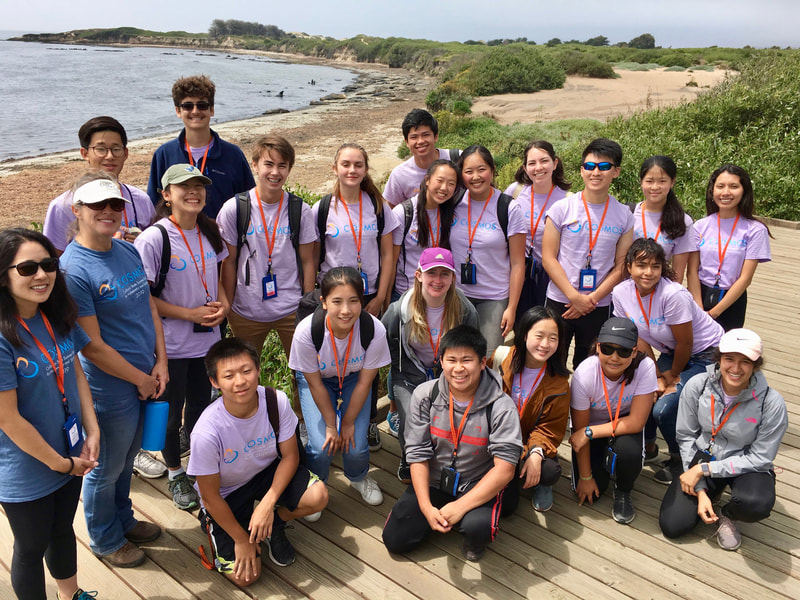 Imagine being able to teach a computer to do something simply by telling it what to do instead of having to code. This week, Cluster 9 focused on this idea and how natural language processing (NLP) could be applied to accomplish this. Given the current state of Human-Computer Interface technologies like Siri and Alexa, the idea seems far-fetched, but the utilization of NLP techniques and probability models can make it a reality. In addition to learning about applications of NLP, Cluster 9 attended Professor Narges’s undergraduate lecture on machine learning. For most of us, it was our first experience at a university lecture hall. We focused on two topics: preventing overfitting in a machine learning model and Convolutional Neural Networks. Overall, this week’s material expanded on many ideas covered during the first few weeks and enabled us to complete our group projects that are ready to be presented soon.​ 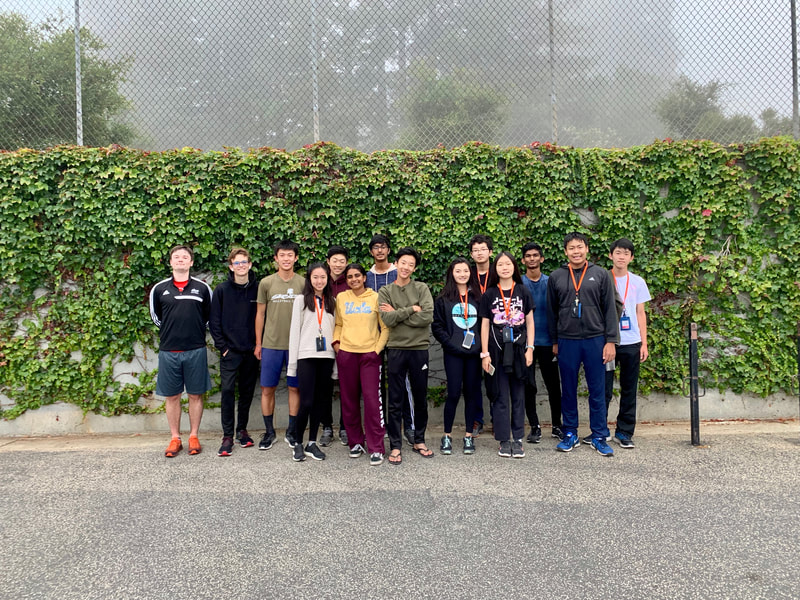 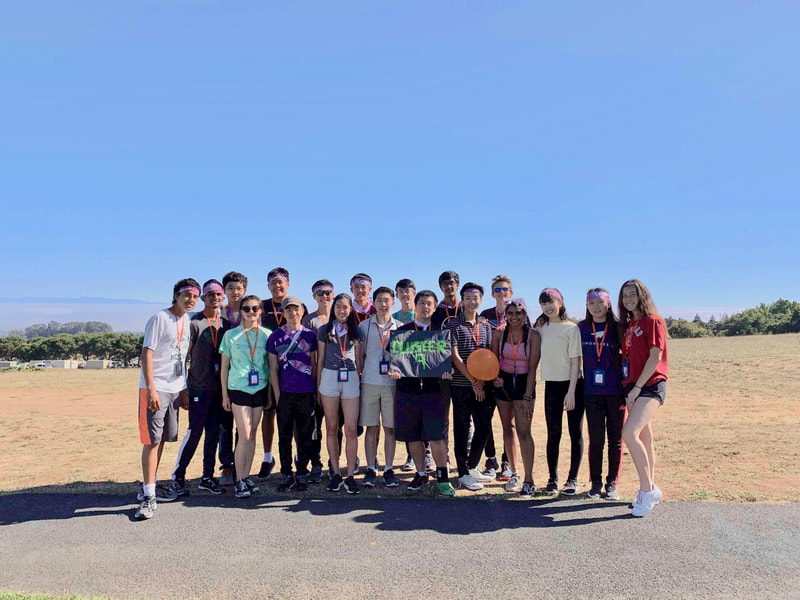 With the third week of COSMOS coming around, everyone was extremely exhausted. However, on Tuesday, Professor Oye decided to spice things up a bit; instead of listening to our daily lectures, we got to play with Play-Doh for two hours! With the Play-Doh, we manufactured our own transistors by imitating the actual steps it takes to process one in the real world. This hands-on activity was a fun experience that allowed us to better visualize semiconductor processing. Other days of class included learning about band lineups, lattice constants, and some of the strain and stress effects on a band gap. We dove deeper into the concepts behind quantum wells and the particle in a box as well. In addition, we worked more on our final projects. All groups finished up posters this week after a lot of time spent on research and formatting. One more week left for brushing up on presentations! 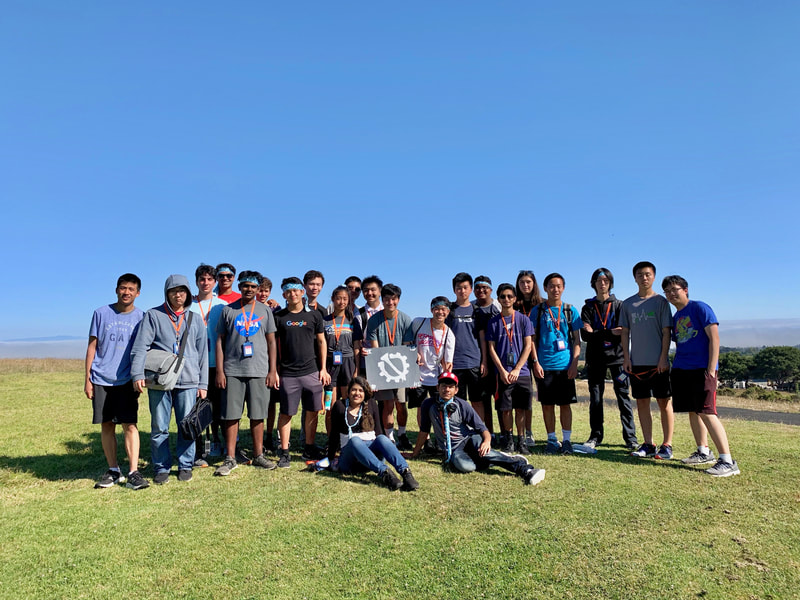 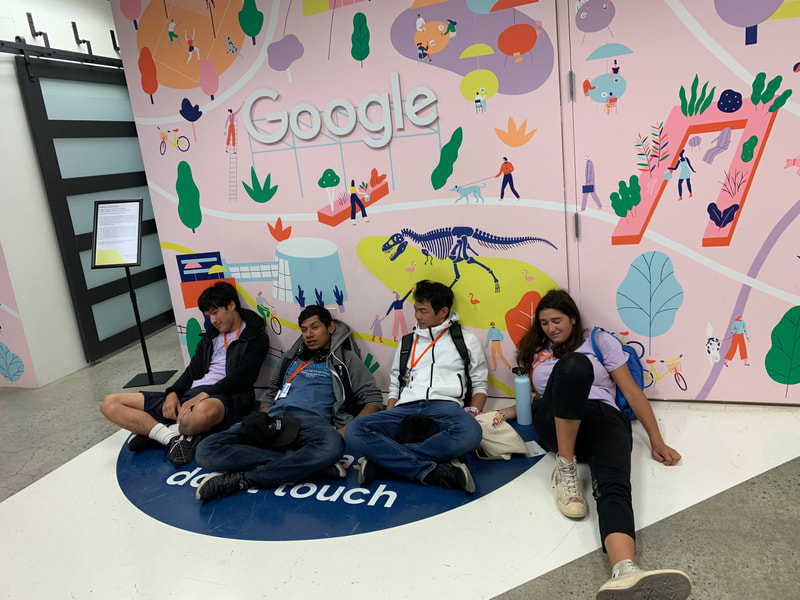