Every week each cluster writes a small summary of their collective experiences and thoughts.
Cluster 1

Angelina Lee (Cluster 1)
From creating truth tables to proving unique prime factorization, the induction of Cluster 1 into COSMOS has been filled with engaging lessons and homework problems. One problem in particular has piqued the interest of not only us, but other clusters as well. The riddle with the brown-eyed and blue-eyed tribe has captivated the attention of many people due to the critical thinking required to solve it as well as its complexity. Aside from academics, we have also been involved in a campus-wide scavenger hunt for drawings of “Bobs”. 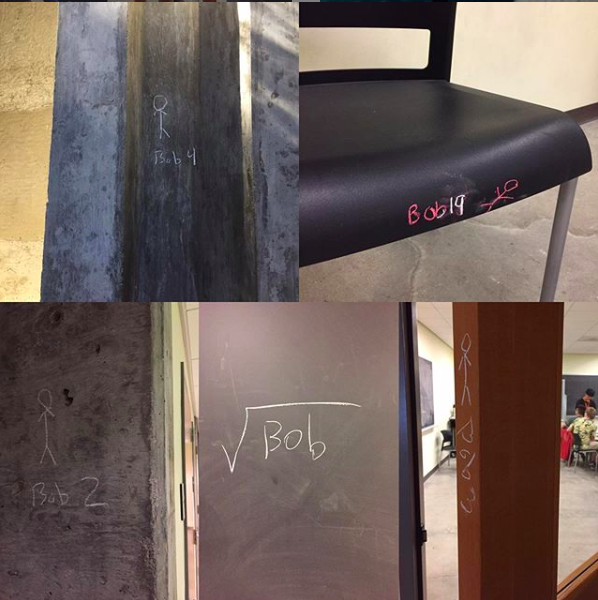 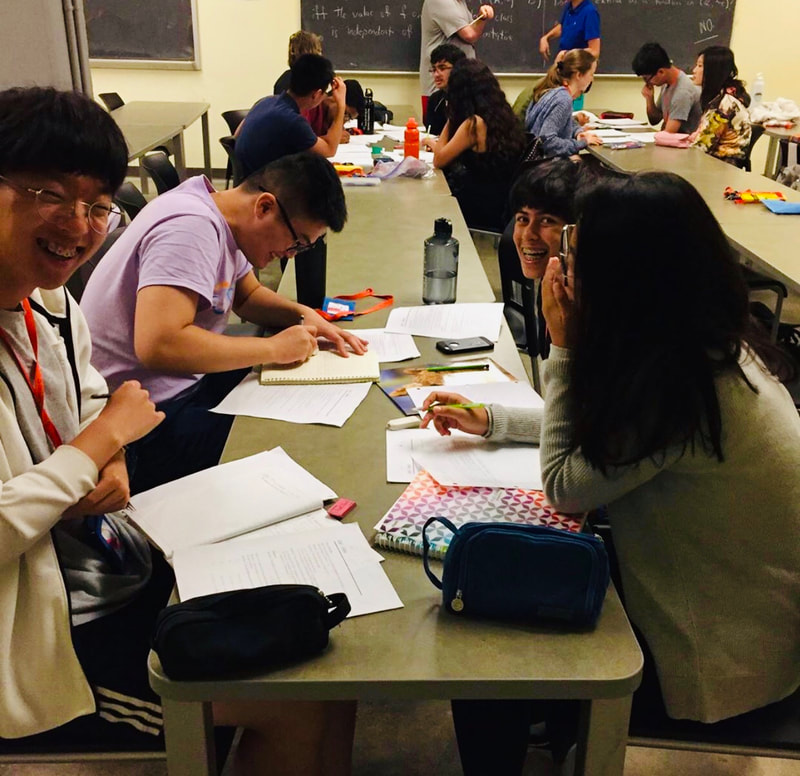 Cluster 2
By Justin He, Jonathan Morales

Although nanochemistry concerns a small scale, Cluster 2 saw how large its application could be in its first week. After observing lectures given by Professors Shaowei Chen and Roger Terrill on quantum mechanics and nanomaterial properties, we explored the real-world applications of nanochemistry through hands-on activities. Our first exploration involved exciting electrons of gold nanoparticles with colored lasers and observing their fluorescence. Later, we synthesized Graphene Quantum Dots (GQDs) of varying sizes by breaking apart and restructuring atoms of citric acid. Exposing our product to ultraviolet light, differences in fluorescence were observed, which were attributed to the differing sizes of the GQDs. To conclude our week, we visited IBM’s Almaden Research Center, where we listened to lecturers present advanced topics such as quantum computing and metal-organic frameworks, and toured their laboratories containing state-of-the-art equipment, including electron microscopes, atomic layer deposition systems, and particle accelerators. In addition, of course, we rapidly became close with each other and had the time of our lives! 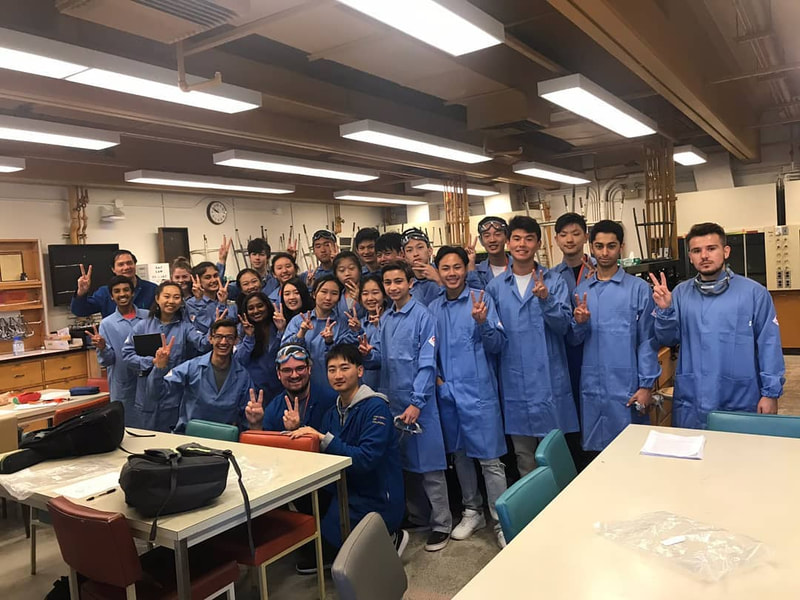 Cluster 3 has been taking a look at terrestrial and marine mammals this week. The first few days were focused on terrestrial mammals, where we started field journals and learned about identifying features of animals through a skull anatomy lab. We put these skills into good use on the field trip on Tuesday, which took place in two different habitats within UCSC (redwood forests and chaparral patches) where we checked previously set traps for rodents that were identified, measured, and then set free (no animals were harmed). While hiking in the upper campus, we separated into groups to set up camera traps. There are pumas, mountain lions, coyotes, and many other mammals in the area, so we hope to capture some good footage by the end of the four weeks. One of the cameras was set up next to a wood rat nest we found when collecting traps, while another was set up near a dead mole we discovered on the side of the road during our hike to see what sort of animals might prey upon it. The other cameras were placed in remote locations around the upper campus with the hopes that animals will walk past them, triggering the motion sensors and allowing the camera to take pictures and record video. During the other half of the week, we had lectures about marine mammals and the research conducted by Dr. Shawn Noren. Cluster 3 combined forces with Cluster 8 on their whale watching field trip on Thursday, where we spotted humpback whales, Risso’s dolphins, and many more marine mammals. 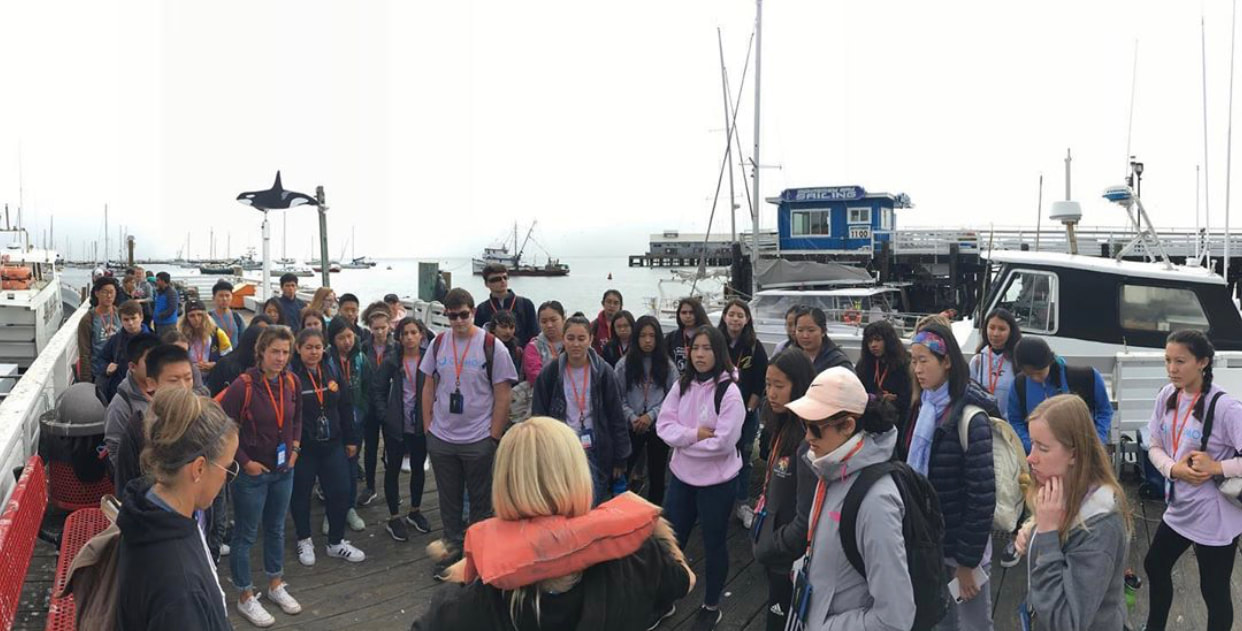 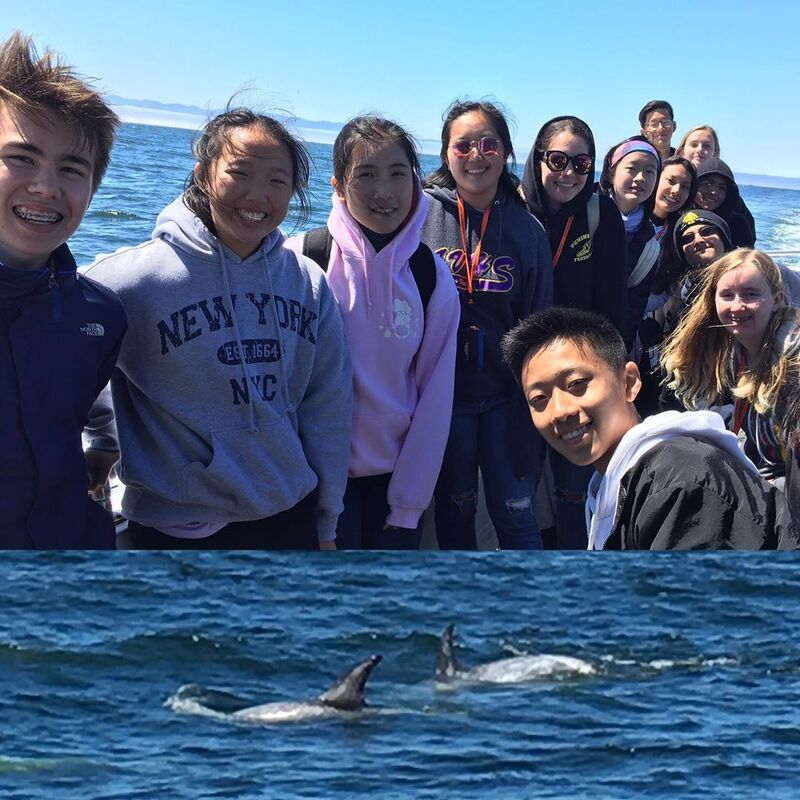 This week in Cluster 4, we have been introduced to aspects of astrophysics, nanophysics, and calculus. To begin with, we were introduced to possible final project topics concerning the astrophysics curriculum taught in the cluster, and learned calculus concepts like derivatives, which we used in order to begin understanding the physics behind simple harmonic oscillators. We then added a drag force to this concept, gaining the newfound knowledge of partial derivatives in the process. After, we used the concept of partial derivatives to derive Schrӧdinger’s equation and solve it for the wave function, which describes the possible positions of a quantum object. We were later able to use Schrödinger’s equation to solve for the energy levels of an infinite potential energy well and to design a quantum dot that absorbs a certain color of light; began the process of creating graphene; and engaged in a presentation on science, pseudoscience, and the importance of communication and media literacy in relation to the way science is presented to the public. 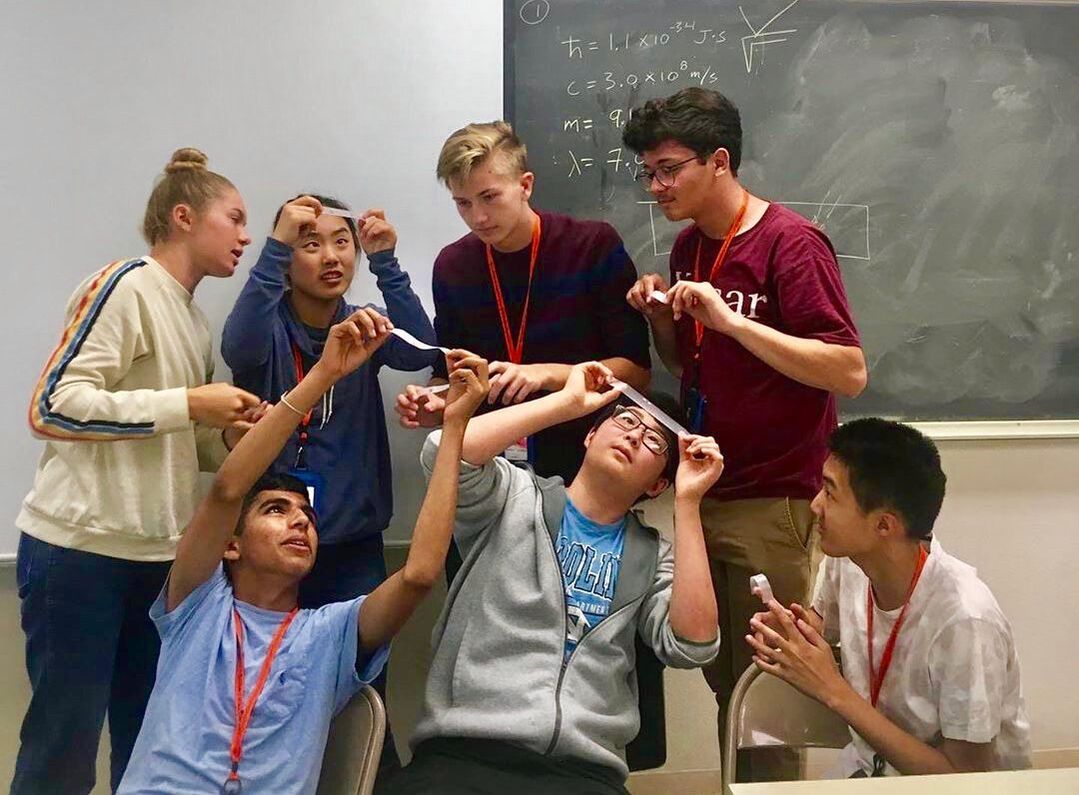 Here in Cluster 5, we’re all about feelings — at least, according to our lovely instructors, A.M. Darke and Marcelo Viana Neto. Bringing together the most diverse and talented band of students on campus, Cluster 5 has it all: the shining personalities, the meme quarantine, and the skillsets — from artists to writers to programmers to musicians, and now, to game designers too. We’ve played every game under the sun, especially on Wednesday during the Masterheck Game Kitchen in which we designed our own outdoor games. Yet only from many hours of gameplay have we gradually developed an understanding for initial game design concepts and been able to build connections as strong as rock (paper, scissors) among our diverse student group. On Thursday and Friday, we had our first official video game design session with the Processing game engine, a rewarding end to a long week. Here’s to our first week of camp, and we’re looking forward to more weeks of cringey cluster chants, arduous homework assignments, and game design to come. 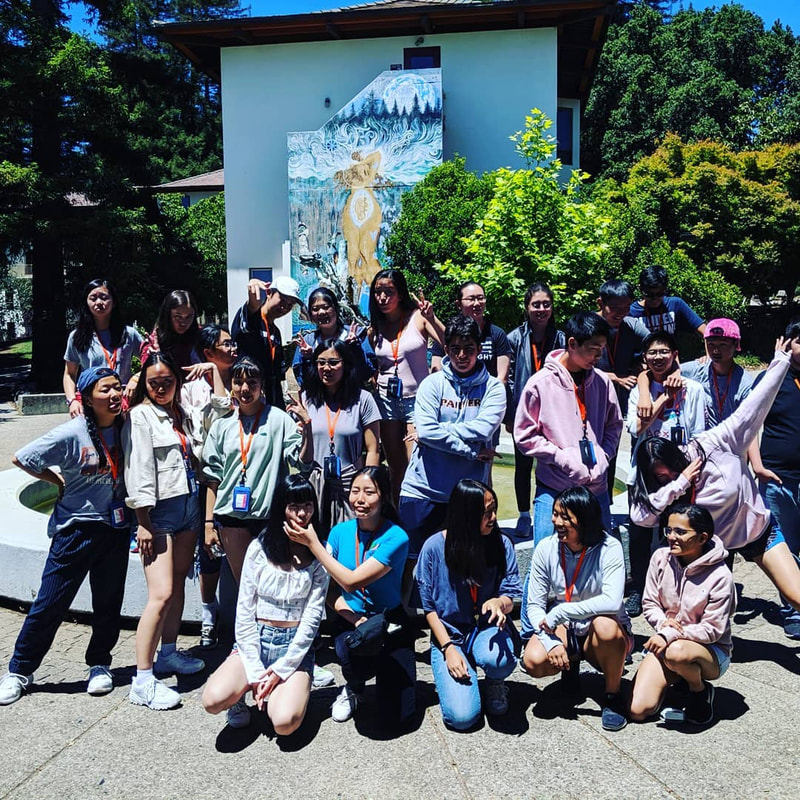 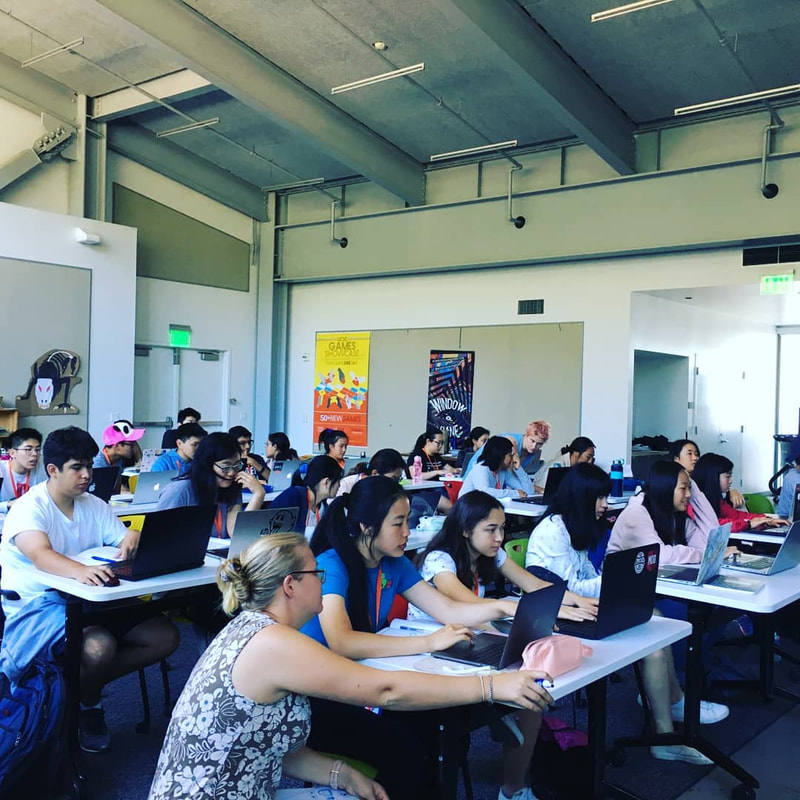 Cluster 6 students dove head-first into computer networking and robotics this past week. They began learning the basics of binary numbers in their computer networking classes, starting with conversions between decimal numbers, hexadecimal numbers, and binary numbers. As the days went by, they got tastes of more complicated concepts, including different notations for binary numbers, as well as situations where said notations would be used. While the concepts were multi-layered and more complicated than meets the eye, students approached content with logic and a healthy dose of curiosity, asking questions and interacting with the material they were taught. In their robotics classes, Cluster 6 students were introduced to C, a programming language they will continue to use for the rest of their time at COSMOS. After learning about basic concepts such as variable types and loops, they began programming their “roach-bots.” They gradually learned more concepts, such as the usage of functions and timers, and they incorporated them into their code. Through the tedious (yet rewarding) process of trial and error, students were able to perfect their code and get the results they wanted. Ultimately, Cluster 6 had a great first week and are ready to take on new challenges! 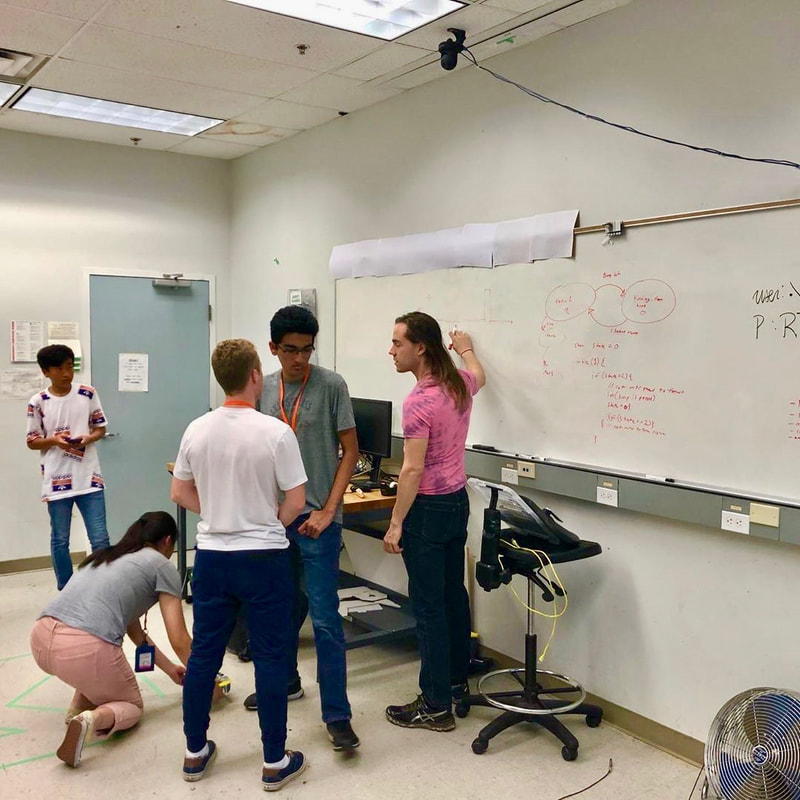 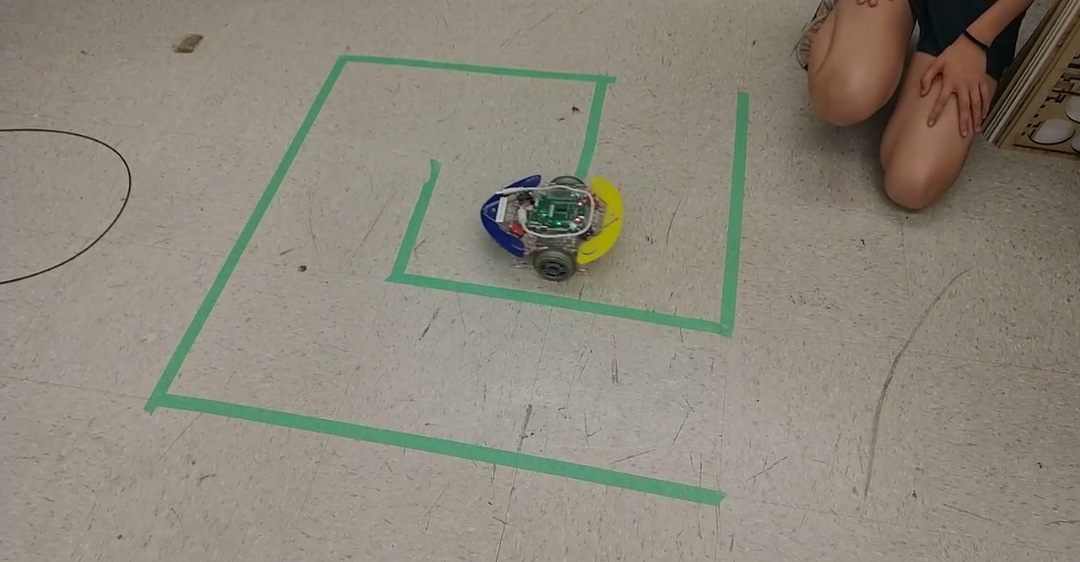 This week, Cluster 7 was in microbiome heaven! We started off our very first day with the enumeration of the bacterial culture Schewanella, meaning that we grew Shewanella cultures at varying concentrations and watched them grow into interesting shapes. On the very same day, we ground up shellfish and tested the samples for domoic acid, a toxic pollutant that can lead to memory loss in humans who consume them.
The highlight of our week was visiting the wharf near Monterey Bay to collect samples of water and learn directly from NOAA scientists who were present. Later, we filtered our water samples and placed them in mTEC agar. While our legs may be exhausted from the excessive amount of walking to and from classroom 223, our brains are not; they are always ready to absorb more knowledge. We look forward to the next three weeks and all the wonderful information that we will get to learn. 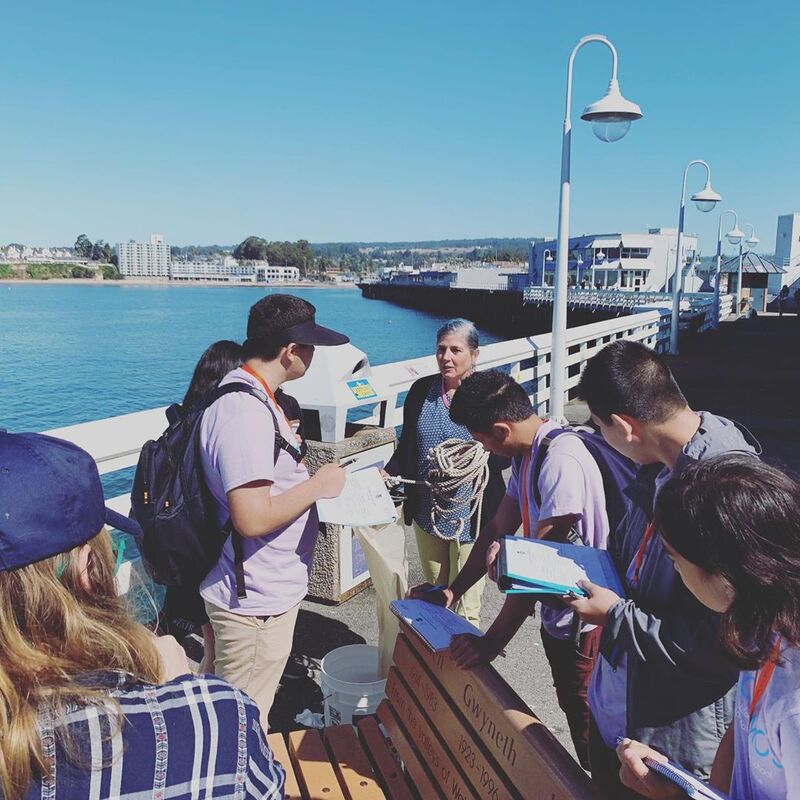 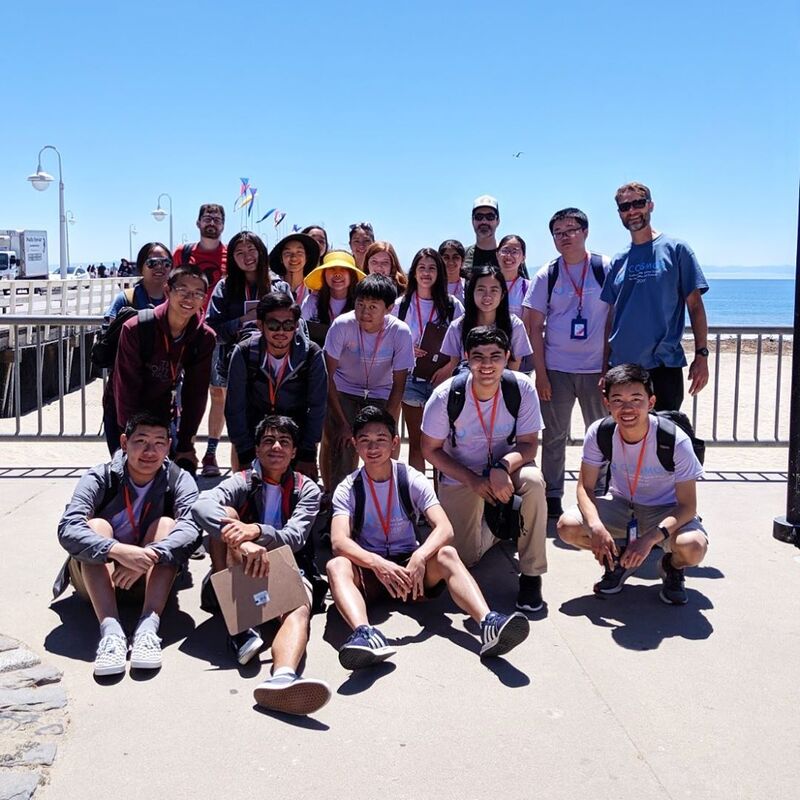 Cluster 8 had a very exciting first week! We began by learning about physical oceanography, which included the chemical properties of water, factors that affect the density of seawater, and the geological formations that impact ocean currents. To demonstrate the Coriolis Effect and centrifugal forces, we were spun on a playground roundabout and tried to catch balls that curved as they were thrown to us. We also had the opportunity to explore the concepts covered in our  lecture, as we attempted to use the density of certain liquids to make a rainbow colored test tube. After learning about how the work of the professors has impacted the real world, we began researching articles for the final projects, ranging from nutrient dispersal and zooplankton, to marine mammals, such as polar bears and dugongs. The highlight of the week for Cluster 8 was a whale watching field trip in which we saw multiple species of marine mammals, including humpback whales, Risso’s dolphins, sea lions, and sea otters. 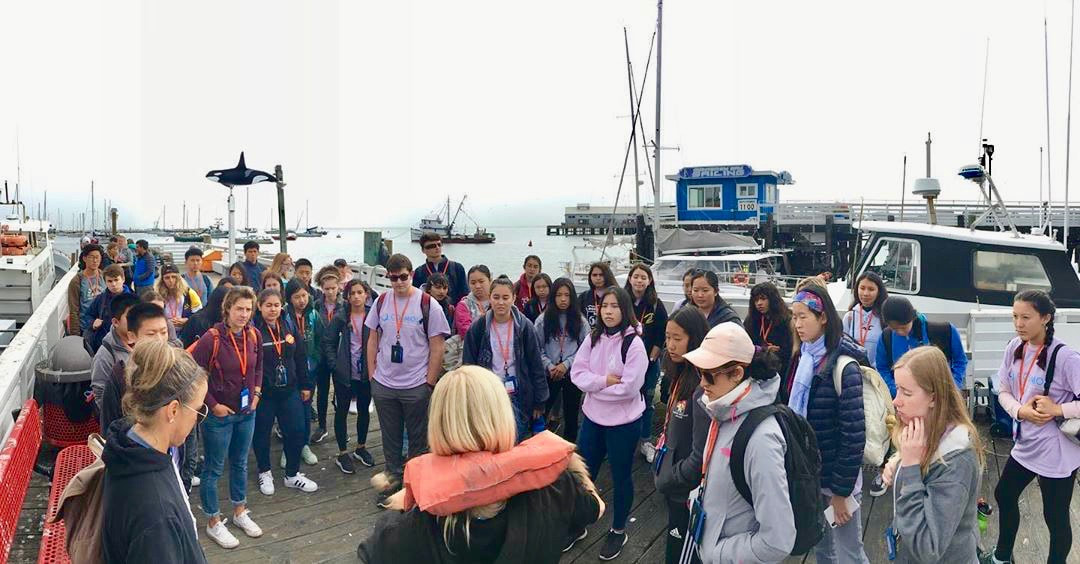 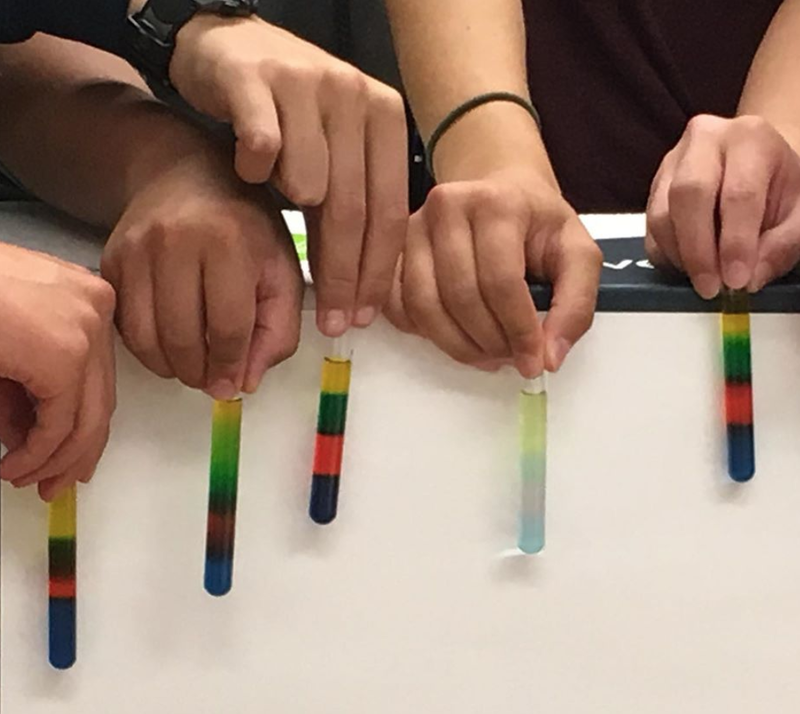 Playing Pokemon Go, coming up with cringy chants, and programming were all among the myriad of activities that cluster 9 partook in this week. Despite landing in foreign territory in the beginning and not knowing many of the people around us, we were all able to adapt and enjoy our time so far at COSMOS. Our class began with an introduction to the Python programming language, the most popular for machine learning. We started with learning the syntax of the language and ended with the fundamentals of machine learning. As we progressed through conditionals, loops, and functions, our professors also challenged us with software engineering interview problems to improve our problem-solving skills. Our cluster is eager for the upcoming days in which we will learn to apply Machine Learning and Natural Language Processing to solve real-world problems. 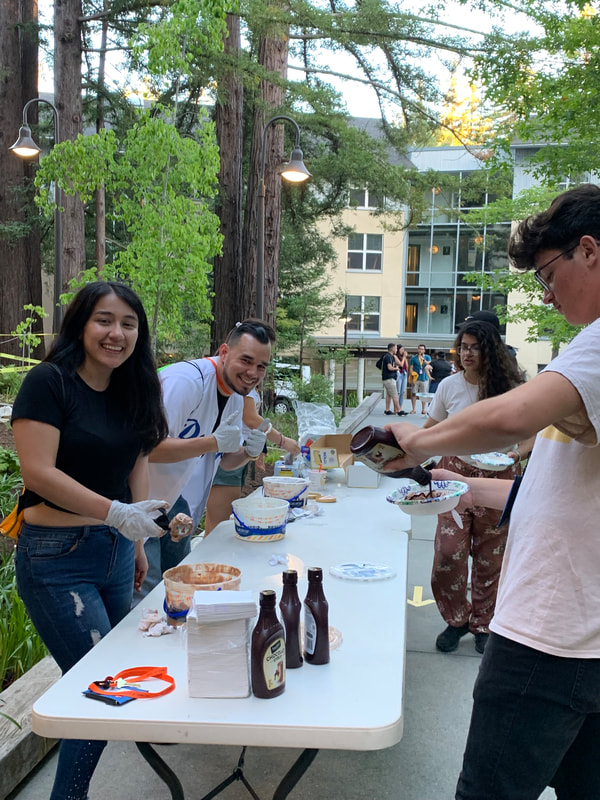 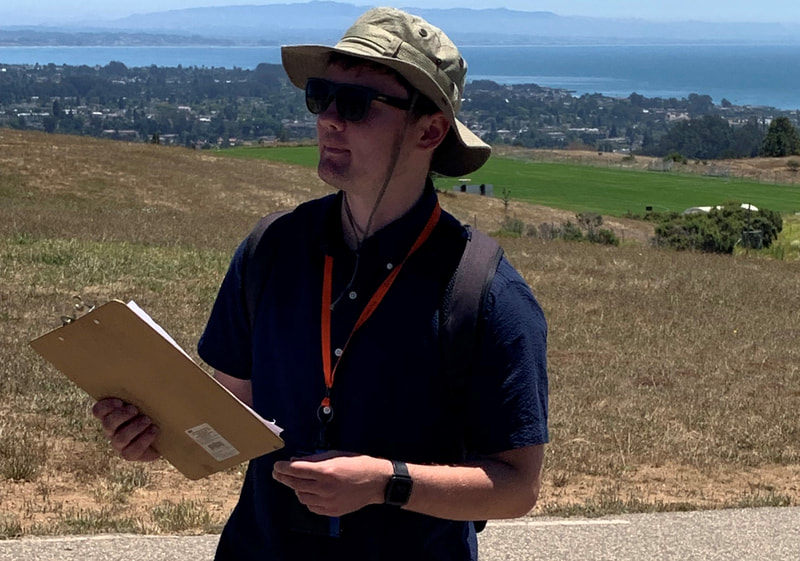 The first week of Cluster 10 was surely a challenging one. We spent our recreation times and study hall hours discussing confusing lecture concepts and doing homework problems. Additionally, we encountered our first quiz on Thursday—as mentioned in our cluster chants. Despite these challenges, Professor Oye managed to squeeze lots of information into a single week. Cluster 10 started by learning about crystal structures, and by the end of the week, we were looking into band-gaps, doping semiconductors, and fermi dirac distributions. The highlight of the week was the field trip to an IBM research center in Almaden where we listened to lectures with subjects ranging from quantum computers to polymers. Additionally, we were also able to visit three different labs at IBM, one of which being a particle accelerator. ​ 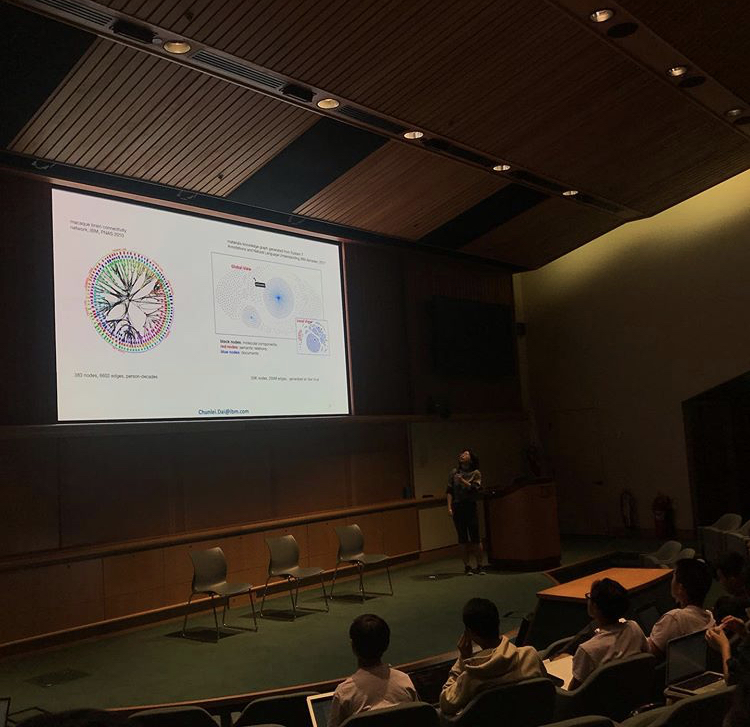 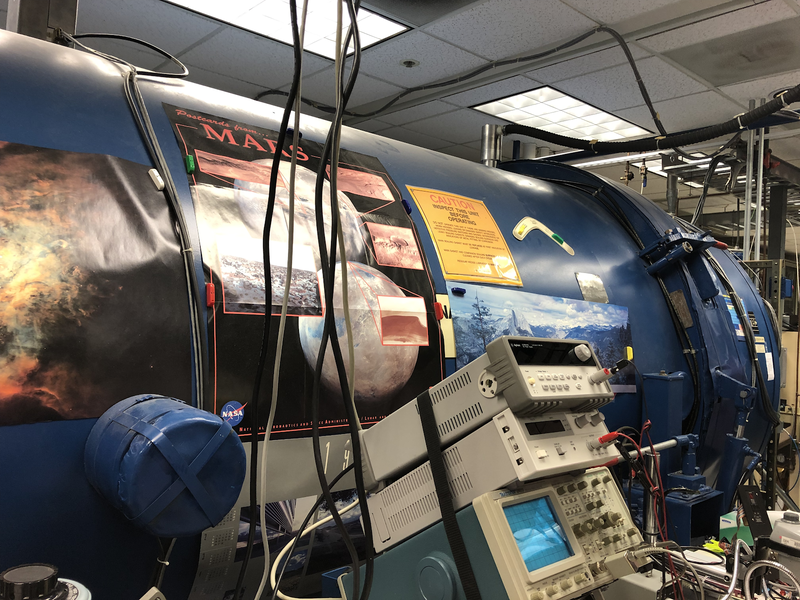